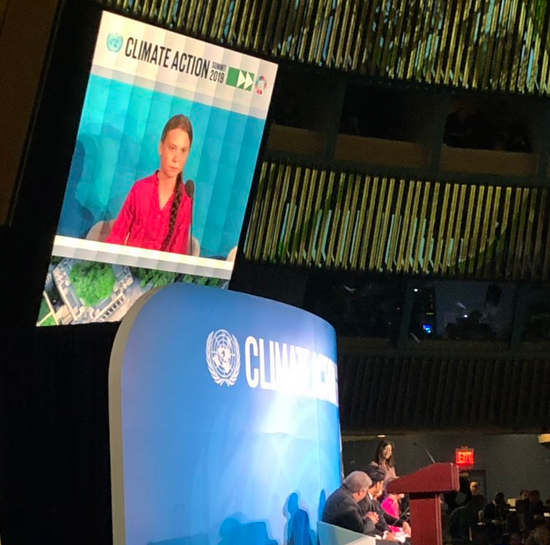 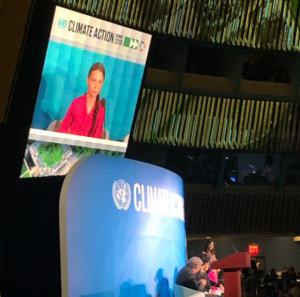 At the opening of the United Nations Climate Action Summit in New York earlier today, Swedish activist Greta Thunberg did not mince her words.

“This is all wrong. I shouldn’t be standing here. I should be back in school on the other side of the ocean. You all come to us young people for hope. How dare you! You have stolen my dreams and my childhood with your empty words. And yet I’m one of the lucky ones.”

She added: “People are dying, entire ecosystems are collapsing. We are at the beginning of a mass extinction and all you can talk about is money and fairytales of eternal economic growth. How dare you.”

Swedish climate activist Greta Thunberg at #UNGA: "This is all wrong…You all come to us young people for hope. How dare you! You have stolen my dreams and my childhood with your empty words—and yet, I'm one of the lucky ones." https://t.co/udGF7bQnR9 pic.twitter.com/kGfqzPMDVH

Diplomats are not used to such forthright language. Rachel Kyte, the Special Representative of UN Secretary General and CEO @SEforALLorg, tweeted:

Applause for @GretaThunberg and a lot of awkward shifting of positions and discomfort. Air left the room. Truth hurts. Accountability is tough. Her unwavering focus and blistering anger burns. A moment that must tilt action on its axis. #ClimateActionSummit2019 pic.twitter.com/REdkaD4PX5

Those fighting for radical action applauded her speech, though. Kumi Naidoo, the head of Amnesty International, tweeted:

"If you choose to fail us, we will never forgive you.” @GretaThunberg’s words should be forever etched in the minds of world leaders.

They have a choice to make: to save us from climate change, or not.

One of these choices is utterly unforgivable.
pic.twitter.com/m2xgLbBcJU

All the evidence is that we are still on the unforgivable path, however. Greta’s words will be in vain.

President Trump can’t even bother to turn up to the meeting and is in the words of Politico: “the spoiler at the global climate bash in New York this week.” To add insult to injury, Trump is expected to be at the UN buildings today, but will be speaking at an event on religious tolerance.

The EU, which likes to see itself driving international action on climate change, is not expected to offer anything new, either.

So do not hold your breath. As Jessica F. Green, an Associate Professor in Political Science at the University of Toronto, notes in the Washington Post, from today’s summit “Expect hopeful rhetoric and discussion about ambitious programs, but no concrete results … don’t expect it to produce the rapid decarbonization that scientists agree is needed.”

So what is needed?

Greta outlined the numbers in her speech: “To have a 67% chance of staying below a 1.5C global temperature rise – the best odds given by the Intergovernmental Panel on Climate Change – the world had 420 gigatonnes of carbon dioxide left to emit back on 1 January 2018. Today that figure is already down to less than 350 gigatonnes. How dare you pretend that this can be solved with business-as-usual and some technical solutions.”

Just a few blocks from the UN Summit, CEOs of major oil companies have gathered to discuss their false solutions to climate change at the aptly named Oil and Gas climate initiative. For most people and scientists to save the climate, you have to stop drilling for oil, gas, and coal. It is that simple. For the oil industry, it wants to carry on drilling and make people believe in “fairy solutions,” such as carbon capture, use and storage (CCS).

Indeed, earlier today the Initiative put out a press release promising to “unlock large-scale investment in carbon capture, use and storage (CCS), a crucial tool to achieve net zero emissions.”

We know CCS won’t work. We have to stop drilling. It is that simple. As the oil industry walked into the venue, outside protesters were out in force.

50+ protestors are outside a Manhattan hotel where oil executives are gathered ahead of the UN #climate summit. “They knew, they lied, they need to pay!” they’re chanting, holding up “Wanted” signs with oil CEOs on them pic.twitter.com/z5uLJgaOvN

There is no time for false solutions that will fail to address climate change. As Greta said: “You are failing us. But the young people are starting to understand your betrayal. The eyes of all future generations are upon you. And if you choose to fail us I say we will never forgive you.”

At least her words have resonated with one person. As UN Secretary General, Antonio Guterres, said at the opening of the climate conference: “My generation has failed in our responsibility to protect our planet.”

Our generation is still failing. We have the solutions, but we aren’t implementing them at the pace needed. We can stop drilling but we don’t. We can stop fossil fuel subsidies but we don’t. Indeed, Oil Change International and others were outside the UN today protesting at Japan’s continuation of subsidizing coal.

Everything could change. Politicians have to step up. We have to have radical action. Now. We cannot afford any more empty rhetoric.

It is no wonder that Greta, and millions of others, are so angry. As Greta said, she should be at school. But she is not. We have stolen her future. As Dana Nuccitelli, an environmental scientist, notes: “the youth movement sparked by Greta Thunberg and others wouldn’t be necessary if elder generations hadn’t squandered the opportunity for a relatively easy transition toward a stable climate future.”

It is no wonder then that the breaking news is that Greta and 15 other young people have just filed  what is being described as a “world-changing lawsuit,” suing five of the world’s major carbon polluters for violating their rights as children. The five countries are Argentina, Brazil, France, Germany, and Turkey.

Kirsten Davies, an international law expert at Macquarie University’s Law School in Sydney, told Earther: “This complaint involves young people holding their guardians, us adults, to account for failing in our ‘duty of care.’”