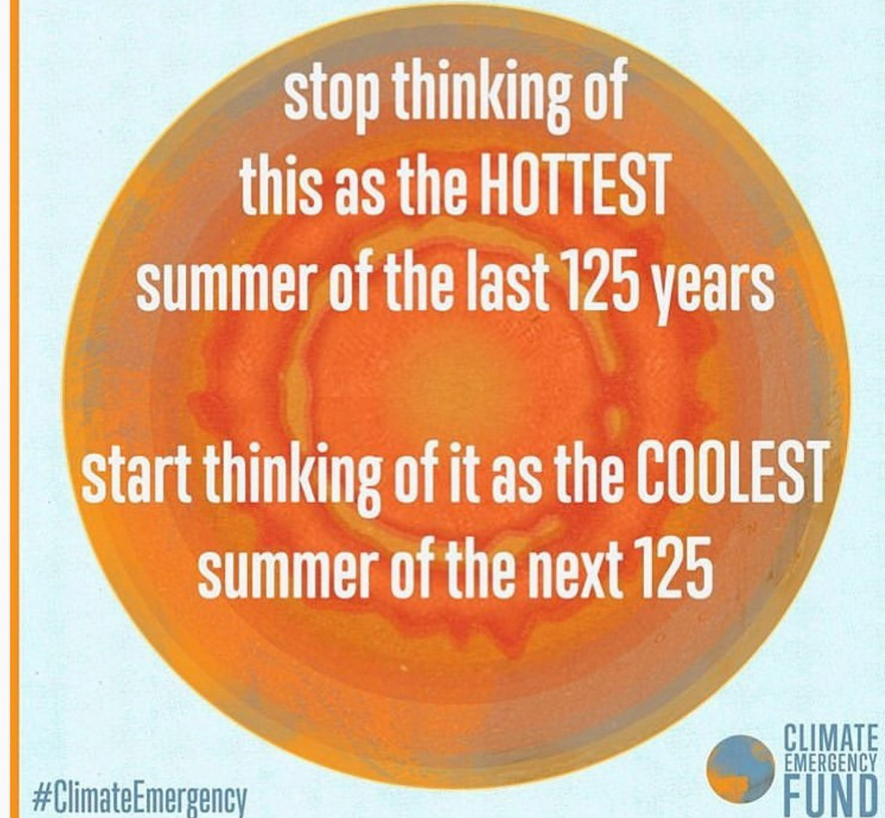 We are witnessing climate change in action.

By the end of yesterday, new records had been broken across Europe as an historic heat-wave gripped the continent.

New all-time records had been set in Germany, Belgium, and the Netherlands. Paris and London set new temperature records too. By the end of yesterday, Paris had reached an astonishing 109 degrees.

Tens of millions people in the Western Europe are now probably experiencing the most concrete effect of human-induced climate change during their lifetime so far. pic.twitter.com/c1ubPwlvFF

This year’s heat follows record temperatures last year too. Indeed, a study published earlier this year by the Swiss Federal Institute of Technology concluded that “Without the climate change caused by human activity, simultaneous heatwaves would not have hit such a large area as they did”.

The situation is set to be horrific for the USA too, if we don’t stop drilling for oil and gas.

Yesterday, the Union of Concerned Scientists (UCS) issued a report, entitled, Killer Heat, which predicted that “The United States is facing a potentially staggering expansion of dangerous heat over the coming decades.”

According to the UCS, “The number of people exposed to the equivalent of a week or more of off-the-charts heat conditions will rise to roughly 120 million people, more than one-third of the population.”

Responding to the report, one of the world’s leading climate scientists, Professor Michael Mann, said: “What we describe as a record heat-wave in a few decades, we will simply call that summer. A typical summer’s day will be like the most extreme day we have seen in our lifetimes, at this point.”

He continues that “if we continue” on our current path, “we are venturing into dangerous territory where a substantially large part of the planet basically becomes uninhabitable.”

The US and Europe are not the only places suffering for extreme heat. Our climate crisis is also happening in the Arctic and Asia.

Although the heatwave has been bad news for Europe, it is terrible and potentially devastating news for the Arctic, where the heat dome is now headed, and which has already been suffering record temperatures.

As the Washington Post notes, the heat dome “could dramatically speed up the melting of the Greenland Ice Sheet and enhance the loss of already record-low sea ice.”

The Financial Times also had a sobering article this week about being on the frontline of climate change in Pakistan, in the increasingly dry and barren Thar Desert. Temperatures in that region of South-Eastern Pakistan have risen in excess of 1.5 degrees – double the global average.

One local woman, Ebu, told the paper that “It used to rain a lot before. It doesn’t now. It has drastically stopped.”

The FT article is written by Harry Johnstone, who worked for the UN and other agencies as a policy analyist for a decade. “In moments of despair, life in Mal Nor, her drought-stricken village in the Thar Desert, seems equally senseless. With the climatic changes under way here, her ancestral lands in this part of south-eastern Pakistan are becoming almost uninhabitable,” writes Johnstone.

“Soon, because of climate change, places like these will be uninhabited, and the desert wind will be the only sound; a long, drawn-out gasp of what once was.”

The numbers of broken families and empty villages will not be counted. Nor will the dead, the dying, or the hungry. And even then, the statistics never tell the story of human suffering or hardship, as crops fail, livestock die, and mouths go hungry.

The heatwave in the North maybe finally and rightly be making the headlines, but it is the poor in the south who suffer too. And mostly they will suffer in silence.

And as they do, we still keep on drilling.

Yesterday, Lee Wasserman, Director of the Rockefeller Family Fund (RFF) asked in the New York Times, given our climate emergency, “Why are we still looking for oil and gas?”

That question drives at the disconnect which is at the heart of our society. For any kind of livable future, we know we have to stop drilling now. But we do not. We need global climate leadership now. But we do not have it, in part due to the overwhelming power and reach of the oil industry into our political systems, including Donald Trump.

As Wasserman pointed out in the Times: “If an artist were to choose colors for portraits of public officials to represent their records on climate change, one color would suffice for Donald Trump: charcoal black.”

He continued: “How better to capture the president’s efforts to increase the extraction of coal, oil and gas at a time when emissions from these fuels are likely to expose tens of millions of people to life-threatening heat waves, coastal flooding, severe storms and water shortages.”

We cannot allow Trump and oil industry buddies to carry on with the status quo. Temperatures are rising and so must we.

As the Union of Concerned Scientists says in its Killer Heat report: “We can continue on our current path, where we fail to reduce emissions and extreme heat soars. Or we can take bold action now to dramatically reduce emissions and prevent the worst from becoming reality.”