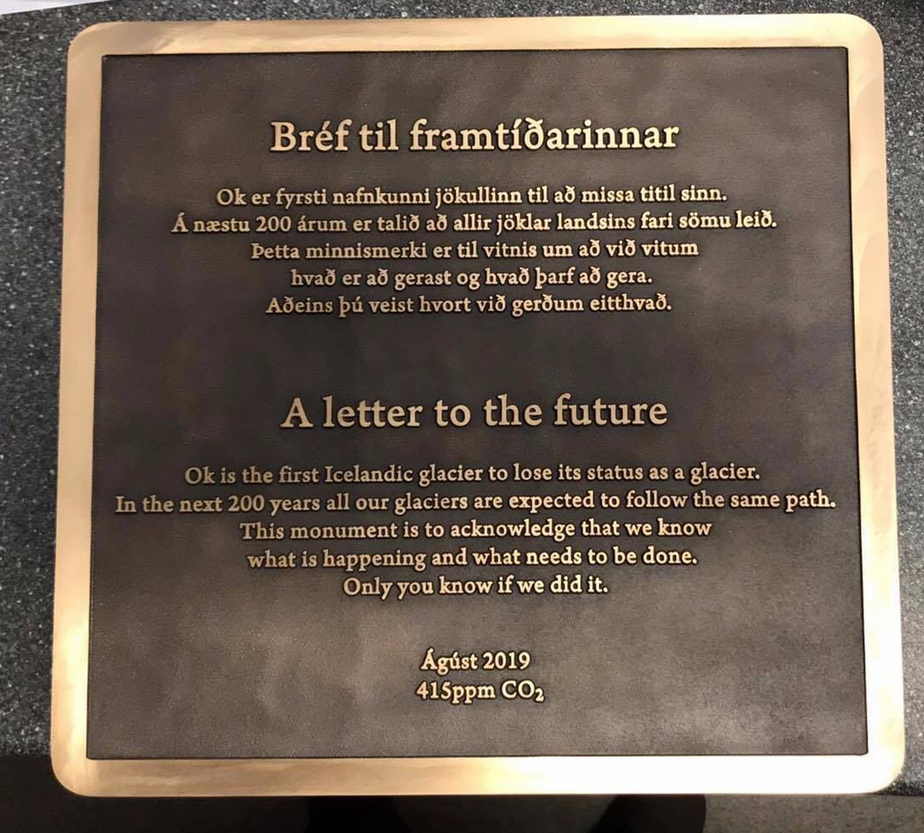 So is this how it ends?

As our climate emergency deepens, as the once great Arctic icescapes melt before our eyes, and once majestic glaciers break up and melt and disappear, we are left to put plaques in their place to lament our lost world.

Our children and their children will inherit places full of eulogies that are a poignant tribute to out lost world and perverse reminder of the power of the oil barons and their backers like the Koch brothers, who put personal wealth and profit above everything else.

The first plaque to a glacier that is no more will be erected by scientists next month in Iceland. Researchers from Rice University in Houston will install a monument for the former Okjökull glacier in Borgarfjörður, Iceland.

As we know, the Arctic is warming rapidly and is on the frontline of climate change. As our world warms, the regions glaciers weep.

Iceland’s 400-plus glaciers have been melting steadily, now losing roughly 11 billion tons of ice every year. Scientists fear that by 2200, Iceland will no longer be a land of ice. All the country’s glaciers will have disappeared.

A century ago, the Okjökull glacier covered 15 sq km (5.8 sq miles) measuring some 50 metres thick. But ravaged by warming temperatures, it has now shrunk to barely one square km of ice less than 15 metres deep, meaning it is no longer classified as a glacier. It is now seen as “dead ice.”

The plaque to the lost glacier is inscribed in Icelandic and English and is “a letter to the future” authored by one of Iceland’s most prominent writers, Andri Snaer Magnason.

Magnason writes: “In the next 200 years, all our glaciers are expected to follow the same path. This monument is to acknowledge that we know what is happening and what needs to be done. Only you know if we did it.”

The glacier’s decline has been subject to discussions and films. The researchers who made the film and are unveiling the plaque are University of Rice anthropologists Cymene Howe and Dominic Boyer. They have been examining how Icelanders feel about losing their glaciers. Last year, they made a film entitled “Not OK” highlighting Okjökull’s sad plight.

“This will be the first monument to a glacier lost to climate change anywhere in the world,” Howe said. “By marking Ok’s passing, we hope to draw attention to what is being lost as Earth’s glaciers expire. These bodies of ice are the largest freshwater reserves on the planet and frozen within them are histories of the atmosphere. They are also often important cultural forms that are full of significance.”

Boyer continued: “Ok was the first named Icelandic glacier to melt because of how humans have transformed the planet’s atmosphere. Its fate will be shared by all of Iceland’s glaciers unless we act now to radically curtail greenhouse gas emissions.”

Cymene Howe added “With this memorial, we want to underscore that it is up to us, the living, to collectively respond to the rapid loss of glaciers and the ongoing impacts of climate change. For Ok glacier it is already too late; it is now what scientists call ‘dead ice.’”

And we need to act fast.

As Dahr Jamail, the author of The End of Ice: Bearing Witness and Finding Meaning in the Path of Climate Disruption points out “almost a quarter of a billion people around the world rely on glacial ice just for their drinking water alone.”

And when the glaciers are gone, people won’t be able to drink plaques written to our lost future. Its that simple.