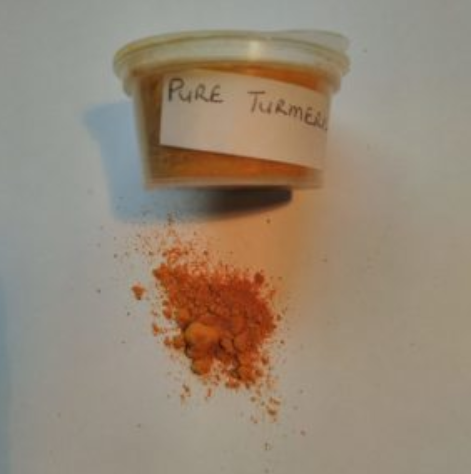 Lazarus Tamana, the Europe Coordinator of the Movement for the Survival of the Ogoni People (MOSOP), holds up a small round plastic container, an inch deep, two inches across. It is filled with a rich yellow, ochre-coloured powder.

“This was grown on the fields at my farm in Bodo, Ogoniland. It is turmeric. I will pass it around. Smell it,” he says.

Lazarus steps out from behind the speaker’s desk and hands the chalice of precious powder to a woman at the front of the audience. She smells it, raises her eyebrows, and passes it on. It goes from hand to hand along the rows of the 40 or so people gathered in the room.

Each of us breathes in the pungent odour. It has hints of the turmeric that languishes on kitchen shelves, but this smell is far deeper, far more potent. It is of the Earth, of the Niger Delta, of that ancient rainforest.

Lazarus is among the speakers at the “Fuel for Action: Activism & Climate Change” event being held as part of the Fuel for Thought exhibition at Art Exchange on the campus of University of Essex, Colchester in the UK.

The show created by ten students on the MA Curating Course at the University creates a gripping space, full of the bold, colourful forms of the sculpture of Sokari Douglas Camp and Nnenna Okore, the artwork of Alfredo Jaar with Jon Daniel, photography by Ed Kashi and Leonce Raphael Agbodjelou, a hypnotic filmed performance by Jelili Atiku. In an annex is showing the award-winning film ‘Ken Saro-Wiwa Lives on!’ by Elisa Dassoler, about art, activism and Platform’s ‘Remember Saro-Wiwa’ Memorial Bus.

The exhibition is a powerful evocation of the long Ogoni struggle against the despoilation of their land in the Niger Delta as a result of oil production by Shell and other corporations. It is a testament to the vital role of art in bearing witness to the intensity of destruction in this “zone of sacrifice”, this place that provides fuel for the carbon bloodstream of our society and yet is so forgotten and ignored by those of us who live in the metropolis.

Lazarus, who has just returned to his London home after five months on his farm in Bodo, speaks to the packed audience in the gallery of the current state of the environment and struggle in Ogoni.

It is now eight years since the UN Environment Report revealed the state of ecological devastation in Ogoni. It is three years since the Nigerian State and Shell announced they would begin the “clean-up” on the basis of the UNEP Report.

It is five years since the citizens of Ogoni won their case brought against Shell in a London court, where the corporation agreed that they would spend £55 million remediating the oil spills around the village of Bodo. And yet it seems nothing has really happened, neither with the Ogoni “clean-up” nor the remediation at Bodo.

Lazarus shows us video footage he recently shot near Bodo.

For as far as the eye can see there is muddy barren land. A man scoops black substance from a liquid filled pit. It is crude oil from yet more spills between January and April 2019. The whole scene reminds us of the battlefields of the Western Front.

Indeed some of the figures are in army fatigues, members of the Nigerian security forces. For this area, this land of Ogoni, is still caught in the midst of a war against its ecology and peoples. It is shocking and deeply dispiriting.

But at the end of his testimony, Lazarus lifts our spirits with the sample of turmeric, spice grown on his fields on good land not far from these massive oil spills. It is a testament of what can be done in Ogoni, that this place does not have to be defined by the oil industry and its legacy. It is a jewel-like monument to the spirit of these people who have fought for so long.

Lazarus was born in Bodo shortly before oil was first extracted by Shell/BP from the rocks beneath the Delta in 1957. Within six years the Ogoni people were beginning to protest against the pollution of their soil, water and air by these British corporations.

For over half a century since, they have resisted in innumerable ways, including using mass mobilisations and non-violent direct action to demand their rights and force change. It has been a bitter struggle, requiring huge endurance from Lazarus and allies.

Next to speak is Jane Trowell, talking of Platform’s Remember Saro-Wiwa project “Of the Battle Bus, the Living Memorial to Ken Saro-Wiwa“, that toured London and England for a decade before being sent to Nigeria in 2015.

On arrival there, the bus was arrested by the state authorities and despite international outcry, four years on remains imprisoned, its voice temporarily silenced by the very institutions and individuals that perpetrated the judicial murder of Saro-Wiwa in November 1995, along with his eight Ogoni comrades.

Jane is followed by Dr Ellisif Wasmuth, a Philosophy Professor at Essex University and a key activist in the Colchester chapter of Extinction Rebellion. She speaks with passion about this uprising in the face of the climate crisis. She transmits hope and urgency about the actions that must be taken in the next 12 years.

We are struck by some parallels between the Ogoni struggle, the insistent energy of the recent School Strikes and Extinction Rebellion’s actions over the past weeks. Like MOSOP, these movements avowed tactics are non-violent action and mass mobilization.

MOSOP managed to inspire an astounding 50% of the entire population of Ogoni onto the streets in 1993. It led to Shell withdrawing from their land and stopping production.

They have not returned for over 25 years, although during that time their pipelines have continued to pump crude across Ogoniland and spill oil onto their fields and into their creeks.

However, this year MOSOP is battling against the looming threat of the oil companies’ return, backed by the government in Abuja. The companies are trying once again to restart production.

The response of the Nigerian state to this unprecedented resistance by Ogoni was to send in the army who enacted a brutal reprisal in which thousands were killed, raped and tortured. In 1995, it led to the ‘judicial murder’ of Saro-Wiwa and the other eight Ogoni after a disgracefully rigged trial.

The first demand of Extinction Rebellion is that the UK government must “Tell the Truth” about climate change. Again this echoes the Ogoni struggle, for since 1995 there has been a long campaign to pressure Shell to “tell the truth” about their collusion in the Nigerian State’s murderous actions.

This campaign lies at the heart of the case currently being heard in a court in Den Haag. Here Esther Kiobel, and three other widows, in taking a suit against Shell, are endeavouring to get justice and reveal the truth about the corporation’s part in the judicial murder of their husbands.

For decades, we have argued that Shell has a case to answer, regarding not only Saro-Wiwa’s trial (and what influence Shell had on the trial) but the wider collusion between the oil corporation and the military.

Previous court documents have revealed, for example, that Saro-Wiwa was framed by the military. There have long been accusations that Shell bribed key witnesses at Saro-Wiwa’s trial, although Shell vehemently denies this.

In a report published two years ago, Amnesty International once again highlighted how the judges at Saro-Wiwa’s trial, “Ignored statements by two key prosecution witnesses that they had been offered bribes to sign false statements incriminating Ken Saro-Wiwa. The bribes allegedly included the offers of job contracts with Shell.”

Shell’s response to this has always been inadequate. Although the company has always denied bribery, in a previous legal deposition, Mark Moody-Stuart, Chairman of Shell in 1995, conceded that the allegations of bribery were examined by Brian Anderson, the then-head of Shell’s Nigerian subsidiary.

Given the seriousness of the accusations, it is surprising that Moody-Stuart explained that no external auditors or consultants were brought in to look at the accusations / evidence of bribery.

Nothing, it seems, was ever written down by Brian Anderson. Moody-Stuart recalls only receiving an “oral” report from him, as a member of Shell’s all-powerful Committee of Managing Directors. We must hold out that Shell will have to finally answer for its actions in court in the Netherlands.

As the struggle to end climate change gains renewed energy from the School Strikes, Extinction Rebellion, building on 30 years of climate activism including Camps for Climate Action and Reclaim the Power, we are still offered wisdom and lessons in endurance from the example of the Ogoni struggle.

From this small nation in the Niger Delta we have learnt how hard the battle can and will be, and what challenging foes the oil and gas corporations are.

But also how we can keep going, through determination and the relentless pursuit of truth, nourished by the soul-lifting creations of artists such as those on show in Essex.

And above all, through the hope represented in Lazarus Tamana’s lifetime commitment to his people’s struggle, and now, the promise of the turmeric crop.