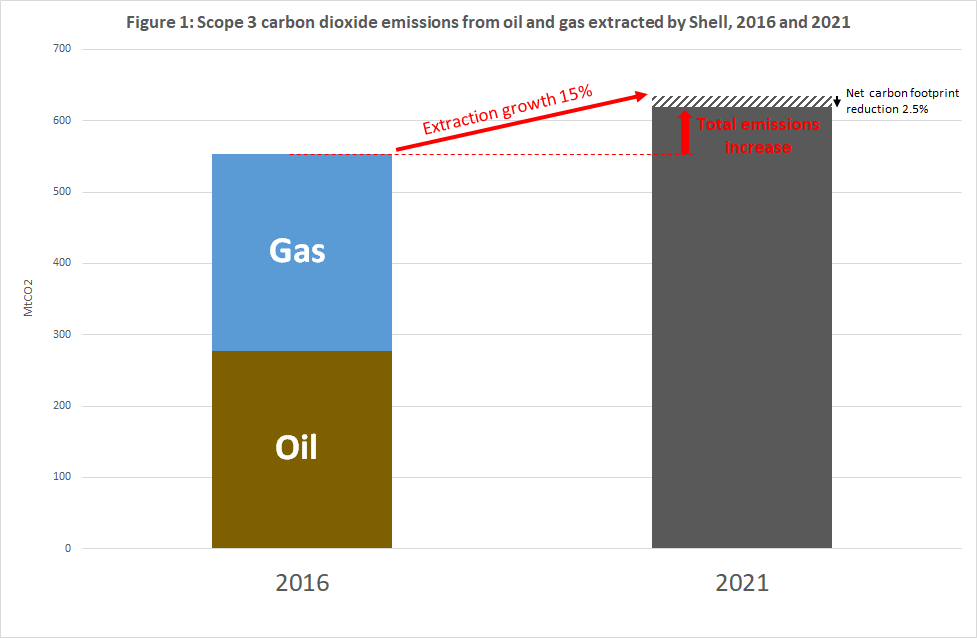 Tomorrow at Shell’s annual meeting of shareholders, the oil giant is likely to claim to be a climate leader. It will probably highlight the company’s target for its “net carbon footprint” to be 2 to 3 percent lower in 2021 than in 2016.

Shell says its “ambition is explicitly designed to be consistent with the emission reductions needed to meet the goal of the Paris Agreement.” Let’s have a look at how this claim holds up. Throughout this blog, we’ll take the midpoint of Shell’s target: a 2.5 percent reduction over those five years.

We could point out that this pace is not in line with Shell’s own longer-term targets. Compounding a decline rate of 2.5 percent every five years would lead to a total reduction of less than 10 percent by 2035 and of about 16 percent by 2050 – well short of Shell’s stated aims of achieving 20 percent and 50 percent reductions by those dates, respectively. At best, Shell is leaving the bigger cuts for later.

We could also point out that last year’s report by the Intergovernmental Panel on Climate Change (IPCC) said global carbon dioxide emissions need to fall by 45 percent by 2030 in order to keep warming to 1.5 degrees Celsius – so Shell’s long-term targets (even on their own terms) aren’t even close to the Paris goals. [1]

But even those two observations would be far too generous to Shell. Because Shell’s target is not to reduce its emissions, only its emissions intensity ratio. In other words, the “net carbon footprint” is defined as the emissions per unit of energy the company sells, not the actual emissions from that energy.

The atmosphere and the climate system do not care about units of energy sold by companies or consumed by humans, or even about the intensity of emissions. What matters are the actual real emissions. So let’s look at Shell’s goal in these terms.

According to data from Rystad Energy’s UCube, Shell’s extraction of oil and gas over the last five years increased by 15 percent (an average of 2.8 percent per year), in energy units. [2]

If Shell expanded its extraction by the same proportion over the five years to 2021, while reducing its net carbon footprint from that oil and gas by 2.5 percent, the total emissions from its oil and gas would still increase by 12 percent – at a time when global emissions need to be falling rapidly. This is illustrated in Figure 1, showing emissions from burning (Scope 3) the oil and gas extracted by Shell in 2016, and how they would change by 2021. [3]

Even if Shell manages to cut its net carbon footprint more rapidly in later years in order to meet its longer-term targets, it will still extract more carbon in the future than it does today, if it sustains this growth rate. This is shown in Figure 2. [4] 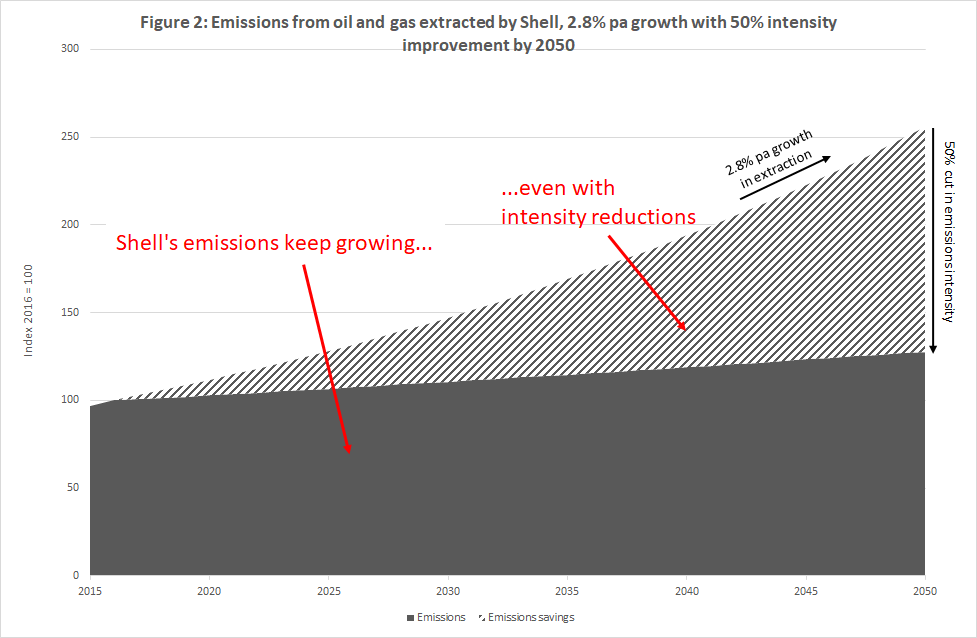 Shell’s plans do not only fall short of the emissions reductions implied by the Paris goals. When we cut through the accounting device, we see that Shell is set to increase its carbon extraction (and hence the consequent emissions). The company cannot credibly claim to be a climate leader.

The real solution is clear: we need a managed decline of fossil fuel extraction, and an end to investment in new fossil fuels.