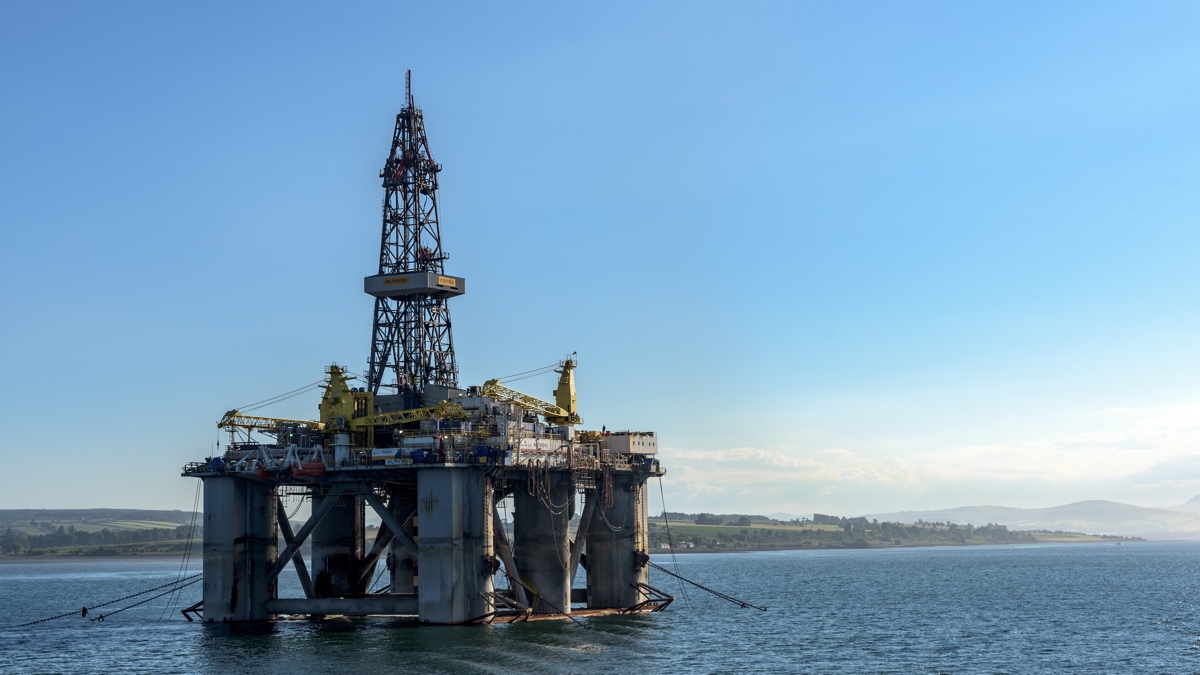 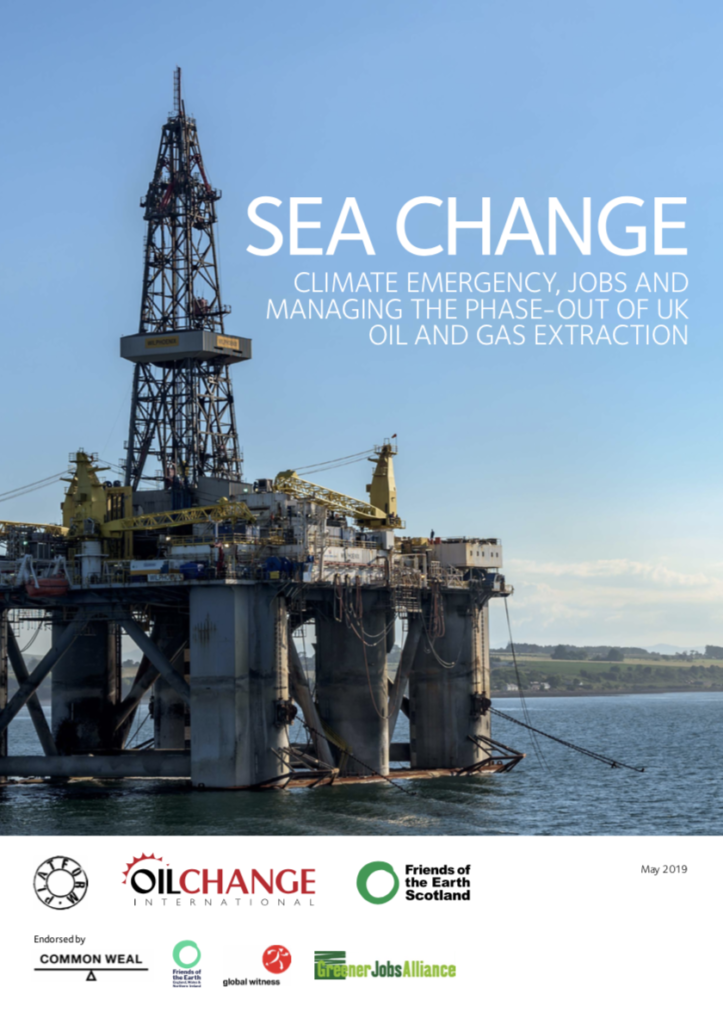 Our new report reveals, for the first time, the climate impact of North Sea oil and gas extraction, and shows the way to a job-creating energy transition. To deal with the climate emergency, the UK needs to immediately stop approving new oil and gas drilling and redirect support to clean jobs and renewable energy.

The UK’s climate conversation has gained considerable urgency in recent weeks, in large part thanks to the work of Extinction Rebellion and the school strikers. Earlier this month, the Scottish and Welsh governments and the UK parliament declared a state of “climate emergency”. Also this month, the government’s official adviser, the Committee on Climate Change, recommended that the UK stop (net) emitting greenhouse gases by 2050 and Scotland do so by 2045. (We blogged about the Committee’s recommendation here).

The key now is to convert this sense of urgency into meaningful action.

Our new report Sea Change, co-published today with Platform and Friends of the Earth Scotland, highlights a crucial piece of that needed action: stop expanding oil and gas extraction.

Oil and gas extraction has been a consistent absentee from government climate policies over the years. While the UK remains a major oil and gas producer, no government has ever proposed restricting extraction to within climate limits.

In fact, the opposite has happened: the policy of both UK and Scottish Governments is to maximise oil and gas extraction, even though both governments aim to be seen as climate leaders. As Chancellor of the Exchequer Philip Hammond has put it: “We are working with the industry to ensure that we extract every drop of oil and gas that it is economic to extract.”

To this end, the £2.3 billion in new oil and gas subsidies introduced since 2014 – mostly by Hammond’s predecessor George Osborne – will add twice as much carbon as the UK’s coal phaseout saves, according to analysis in our new report. And if that’s not bad enough, the government’s ambition through future subsidies is to double this additional oil and gas.

This is the cognitive dissonance at the heart of UK and Scottish climate policy. The very same day that the Committee on Climate Change published its recommendations for net-zero emissions in 26 or 31 years’ time, was the deadline for oil company bids for new 30+ -year licenses to explore for and extract oil and gas, in the latest licensing round. Another round is expected to be launched in the coming months, and another next year, and the following year, and so on.

The government must stop this new licensing, which adds yet more carbon to an overloaded atmosphere. When you are in a hole, you need to stop digging.

But it is not just governments: the media have generally treated oil and gas extraction entirely separately from climate change, and few commentators draw the connection. With almost all current extraction offshore, is it a case of out-of-sight, out-of-mind?

In his classic social history of North Sea oil, Christopher Harvie observes that even in its ’70s and ’80s heyday, there were no miniature rigs in toy shops, no pubs named The Driller, no literature set offshore, not even a mention in the major political memoirs of the day. And now, we see, no North Sea in the climate debate.

Thankfully, people have found it easier to see the climate incompatibility of opening a new fossil fuel frontier with onshore fracking, and Scotland and Wales have effectively stopped the industry. But new oil and gas offshore presents the same dangers.

Oil Change International’s previous analysis has shown that carbon emissions from the oil, gas and coal in already-producing fields and mines would exceed the warming limits set in the Paris goals, of well below 2 degrees, and pursuing efforts to keep to 1.5 degrees.

The carbon in these developed reserves is “locked in”, as the infrastructure has been built and the capital invested. Reducing those emissions requires shutting projects early, a task that can be economically, politically and legally difficult. The more fields and mines that are opened, the more will have to close early.

The UK has 5.7 billion barrels of oil and gas in already-producing fields. The government and industry want to go further and extract 20 billion barrels.

Let’s assume (and hope) that at some point in the future, governments will eventually start to act at a sufficient pace to avoid the most dangerous impacts of climate change. If in the meantime the UK and others have opened yet more fields and mines, they will all have to be closed that much faster, in order to stay within carbon budgets.

By continuing to license new oil and gas, the UK is either helping push the world beyond climate limits, or setting up a deferred collapse of the industry when sudden global emissions cuts finally come. A deferred collapse would be devastating for oil workers and for communities like those in the northeast of Scotland.

It doesn’t have to be this way.

Three different studies – by the Centre for Alternative Technology, by Stanford University and by Vivid Economics – have shown how the UK could be entirely powered by clean energy by 2050 or earlier. Three more studies – by the Technology University of Sydney, by consultancy Navigant and by the International Institute of Applied Systems Analysis – have shown how this could be achieved worldwide.

All six of these studies use only existing technology, showing that there is no practical barrier to a full transition. With wind and solar now cheaper than gas power in the UK and through much of the world, in all six studies, the transition is affordable. In fact, it could save consumers and taxpayers money, if governments stopped protecting the profits of fossil fuel companies.

If transformation of the energy system within 20 or 30 years sounds ambitious, bear in mind that with active government support, the UK became the world’s fifth largest oil producer just 16 years after the first oil discovery in 1969.

Our report presents new modelling by Platform and Transition Economics of the jobs impact of an energy transition. It finds that for every oil and gas job affected by a managed phase-out of extraction, more than three new jobs could be created in renewable energy or energy efficiency retrofits of homes.

We detail the policies that would be needed to enable a Just Transition to a clean economy within the next two or three decades, including public investment, green industrial policy, protection of the rights of workers and investment into oil-dependent regions such as the northeast of Scotland.

We call on the UK and Scottish Governments to do and support four things, to meet their climate commitments while protecting livelihoods and economic well-being:

The choice facing the governments now has a parallel in the Brexit story. Either the governments must embrace the challenge and start addressing it in a planned and structured way, or if they keep deferring it, the UK may be forced to crash out of fossil fuels with no deal and no plan.

Want to read more? Check out these blogs from our friends: