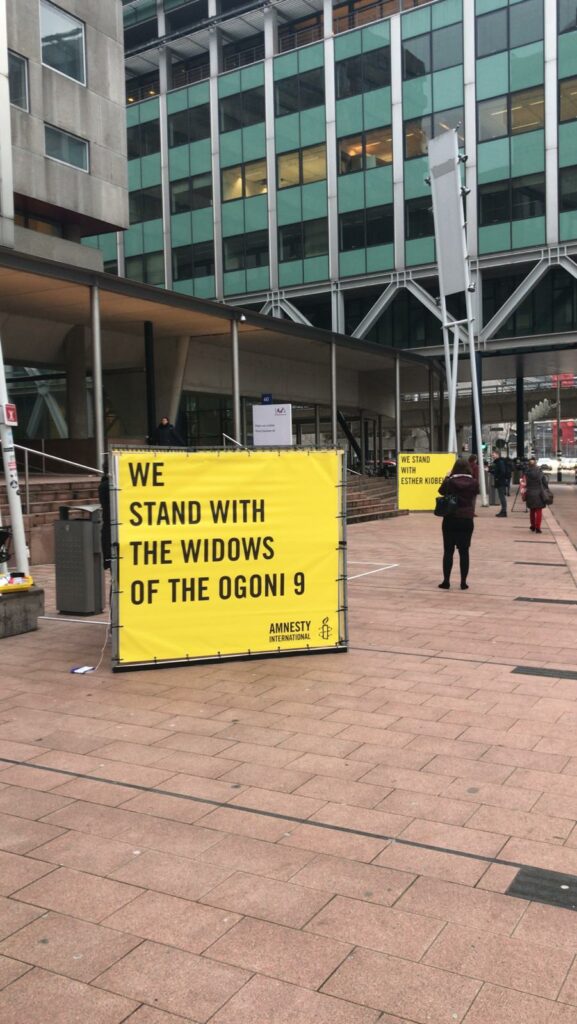 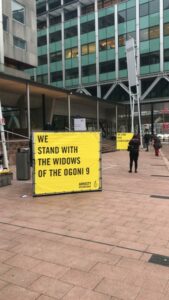 So the long, painful struggle for justice against Shell continues.

In an historic judgement yesterday, a Dutch court issued an interim ruling that it does have jurisdiction to hear the legal case bought by four widows of the Ogoni 9, who were murdered by the Nigerian military back in 1995.

One of the judges at the Hague District Court, Larissa Alwin, said: “This procedure will continue.”

The ruling is a significant setback for Shell and, in the words of the news agency, Reuters, “a rare win in a decades-long legal fight”.

So the case will now be heard in the Netherlands, the home of Royal Dutch Shell. The oil giant had tried to argue that the Netherlands did not have jurisdiction to hear the case.

It is especially a win for lead plaintiff, Esther Kiobel, whose husband was murdered along with playwright and activist, Ken Saro-Wiwa. “I am glad that the court has found it has jurisdiction,” Esther said after the verdict. “My husband was killed like a criminal. I want him to be exonerated.”

It has taken decades to get this far in the tortuous legal process. In February, in an earlier hearing, Esther testified that:

My husband and the rest were killed… The memory of the physical torture my family and l went through has remained fresh in my mind, and whenever l look at the scar of the injury l sustained during the incident, my heart races for justice all the more.

The abuses my family and l went through are such an awful experience that has left us traumatised to date without help. We all have lived with so much pain and agony, but rather than giving up, the thought of how ruthlessly my husband was killed… has spurred me to remain resilient in my fight for justice.

In her statement to the court, another widow, Victoria Bera, who was pregnant with her first child when her husband, Baribor, was arrested, said: “The pain I’ve been living in these years doesn’t seem to go away, no matter what I do, especially when l look at my son, who had to grow up without a father. I need justice. I need justice for my people.”

And yesterday the judges agreed that the four widows can continue their legal campaign for justice.

What is also deeply significant to the plaintiffs as well as to Amnesty, campaigners and journalists is the judge ordered Shell to turn over internal documents that could help the claimants’ case. They also ordered that the plaintiffs could interview witnesses. It will be of great concern to Shell that these documents will become public.

As Reuters reports, this included, “specifically any evidence that Shell paid people to give false information about the activists to Nigerian law-enforcement officials.”

This decision marks a vital step towards justice for Esther and the other plaintiffs. It also sets an important precedent for other victims around the world who are seeking to hold powerful corporations to account, and who struggle to access justice.

Dummett continued: “We salute Esther Kiobel, Victoria Bera, Blessing Eawo and Charity Levula. It’s only because of their courage and persistence that we’ve got this far.”

He added that “Today’s ruling will have great significance for people everywhere who have been harmed by the greed and recklessness of global corporations.”

As I have written before, it is fitting to leave the last word to Ken Saro-Wiwa. Speaking before the military tribunal that sentenced the Ogoni 9 to death in 1995, Ken said: “I and my colleagues are not the only ones on trial. Shell is here on trial … There is no doubt in my mind that the crimes of the company’s dirty war against the Ogoni people will be punished.”