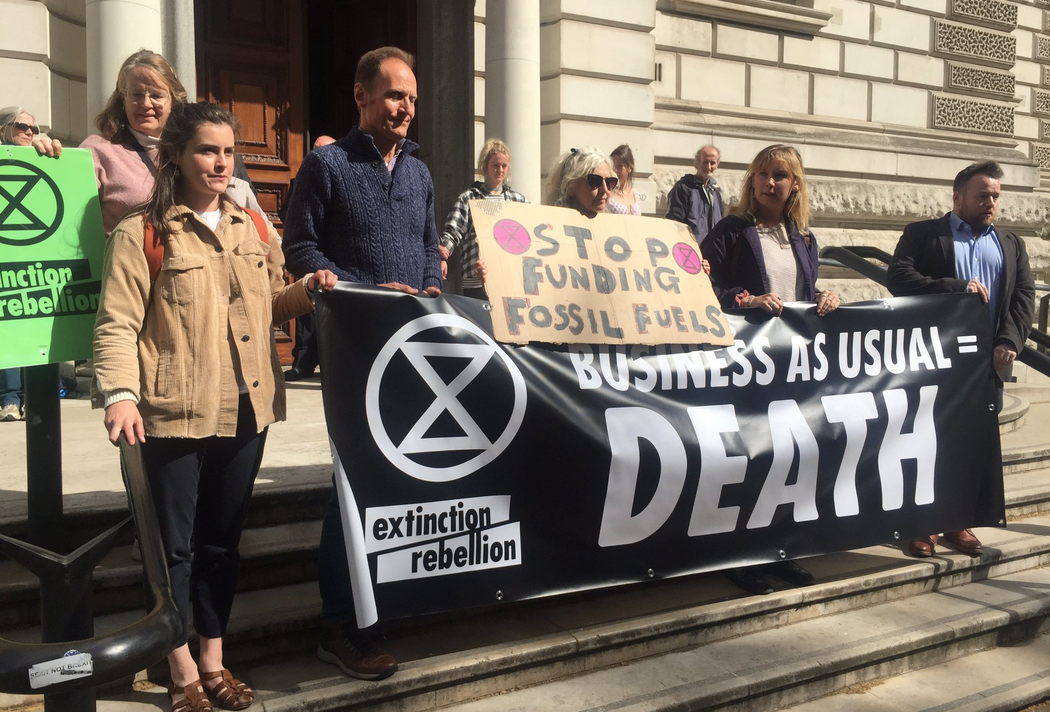 For many of us who have been working on oil and climate for years, the recent days, weeks and months have been inspiring, as we witness a surge in activism and awareness on climate change.

Whether it be the Sunrise Movement, the youth climate strikes inspired by Greta Thunberg, the recent protests by Extinction Rebellion in London where over 1,000 were arrested, or the growing debate over the need for a Green New Deal, suddenly there feels like a seismic shift in public perception and political understanding of the climate emergency.

Every non violent protest, march, speech, blockade, picnic and action slowly pushes climate change to the top of the political and news agenda, where it needs to stay until action reflects the crisis we are in.

Today, on its final day of protest in London, Extinction Rebellion activists have targeted the City of London, with some activists gluing themselves to the London Stock Exchange.

Others stopped trains or blocked buildings, unfurling one banner that read: “Business as usual = death.”

The problem, though, is that even if some politicians pledge that business as usual will not continue, this is exactly what Big Oil is doing. Just carrying on drilling.

For years, scientists and groups like Oil Change International (OCI) have warned that we cannot carry on drilling for oil and still have a safe climate.

Back in 2016, OCI working with fourteen other organisations, produced a report entitled “The Sky’s Limit: Why the Paris Climate Goals Require a Managed Decline of Fossil Fuel Production.” A key finding of the report was that the potential carbon emissions from the oil, gas, and coal in the world’s currently operating fields and mines would take us beyond 2°C of warming.

And now a similar exercise has been undertaken by Global Witness, which not only reveals how Big Oil is going to destroy the climate but waste billions in the process too.

Examining oil industry consultant data on the proposed capital investment by the oil industry in new fields, Global Witness finds that over the next decade:

Even though the science says we cannot carry on drilling, the oil industry capital investment over the next decade is forecast to rise over 85%, reaching over $1 trillion a year.

The bottom line says Global Witness, is that “Right now, the industry is forecast to pump more oil and gas for decades to come. Our analysis shows not only that production from new fields is incompatible with limiting warming to 1.5°C, but also that production from existing fields is already more than enough.”

To extract this oil and gas, the industry needs infrastructure, locking in carbon extraction for decades to come.

Another new survey, this time by Global Energy Monitor, has found that of a total 302 pipelines in some stage of development around the world, over half are in North America.

Ted Nance, co-author of the Global Energy Monitor report, told the Guardian. “This is a whole energy system not compatible with global climate survival. These pipelines are locking in huge emissions for 40 to 50 years at a time, with the scientists saying we have to move in 10 years. These pipelines are a bet that the world won’t get serious about climate change, allowing the incumbency of oil and gas to strengthen.”

Many of these pipelines are trying to get the carbon intensive Canadian tar sands to market in the US. To this end, in Canada, there is even a website called the so-called Modern Miracle Network, which promotes the “miracle of hydrocarbons”. As one article on its website notes: “Simply said Life is Better with Canadian Hydrocarbons!”

Life will not be better with continued hydrocarbons causing climate chaos. The science tells us that. The science is screaming that. And that is why Extinction Rebellion was right in targetting the financial district of London this morning.

Much of the carbon destruction in the coming years will be financed via London, via what is known as the Carbon Web. To be successful, the growing climate rebellion movement has to somehow stem that fossil fuel funding.