A couple weeks have passed since the end of the Global Climate Action Summit (GCAS), and the dust is settling. What’s emerging is a new conversation sparked not at the summit itself but on the streets and in outside events across the city. A new definition of climate leadership has emerged, and the public outcry is deafening, even if thus far world leaders represented at GCAS seemed to strain to avoid hearing it.

This definition is a simple and clear one: If you want to call yourself a climate leader, you have to stand up to the fossil fuel industry, protect communities, and keep fossil fuels in the ground. Anything less is not enough to meet what climate science and justice demand.

In mid-September, business leaders, sub-national officials, civil society representatives, and celebrities converged for the Global Climate Action Summit hosted by Governor Jerry Brown, with conversations focused primarily on efforts to reduce emissions and lower the demand for fossil fuels. Outside the official summit proceedings, however, Oil Change International teamed up with numerous partners to mobilize pressure on Governor Brown and other political leaders to address a major gap in action: putting policies in place to wind down fossil fuel extraction.

California Governor Jerry Brown, the host of GCAS, presents a critical example of this dynamic at play. As host of the summit, Governor Brown sought to use the summit as a victory lap for his climate leadership — but outside the conference center, Californians impacted by ongoing oil and gas drilling demanded action. The call for Governor Brown to lead on a managed decline of oil and gas production in California has been spearheaded by the Brown’s Last Chance campaign, which has been endorsed by over 800 organizations worldwide. Its demands are to stop permitting new fossil fuel production in California, and to ramp down dangerous production near communities as quickly as possible. See our video outlining what these policies could accomplish: 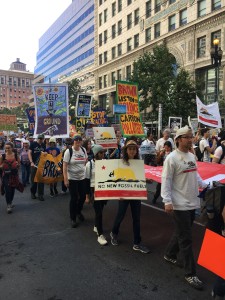 Ahead of the official GCAS gathering, 30,000 people marched through the streets as part of the global grassoots mobilization to Rise for Climate, Jobs and Justice. The march elevated two key demands: 1) No new fossil fuels; and 2) A just transition to 100% renewable energy.

The Brown’s Last Chance coalition brought signs and chants to demand that Governor Brown stop issuing p
ermits for new oil and gas wells and other fossil fuel infrastructure in California, which disproportionately pollute low-income communities and communities of color. OCI’s recent report, The Sky’s Limit California, exposed that the Brown administration has issued more than 20,000 permits for new oil and gas wells in the last eight years.

A resounding message rang through the streets: Climate leaders don’t help dig up more fossil fuels — they help keep fossil fuels in the ground. This “no new fossil fuels” message broke through like never before and became a key part of media reports and conversations coming out of the march. 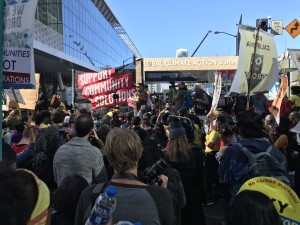 At the official GCAS summit, communities impacted by California’s long legacy of oil and gas drilling disrupted the entrance, protesting Governor Brown’s lack of leadership towards a just phase-out of extraction. We took to the streets with partners in the Brown’s Last Chance Coalition, the It Takes Roots Coalition, and local organizers from Idle No More SF Bay and Diablo Rising Tide, taking over the intersections outside the conference center. The action garnered widespread press attention and confronted summit participants with a critical challenge: Given the world already has an oversupply of fossil fuels, how will they lead in the wind down of oil, gas, and coal extraction?
Summit-affiliated events throughout the city also ensured that supply-side policies — from pulling financing out of fossil fuels to putting policies in place to limit their production — were part of the discussion. During a panel organized by the Stockholm Environment Institute, the Mayor of Vancouver, British Columbia, backed up the message of the protesters:

“In Canada, in Norway, in California, we have leaders claiming climate leadership and approving expansion of fossil fuels,” he said. “You can’t claim leadership on climate change if you are expanding the fossil fuel industry. Let’s hold the line here.”

Steve Kretzmann, OCI’s Executive Director, said in summation of the week that while Brown had not immediately stopped the expansion of the oil & gas industry in California, the #BrownsLastChance coalition had “hip-checked the Overton window of politically possible action on climate. Politicians in California and around the world need to see that there is a substantial and growing constituency for strong climate action that will support and reward bold climate leadership that actually says no to the fossil fuel industry.”

As we look back on GCAS, one can focus on high-level commitments to finance renewable energy, reduce emissions from power plants, and other laudable but ultimately insufficient efforts. But with a broader view, it’s clear that the call to keep fossil fuels in the ground is picking up steam and leaders ought take notice.