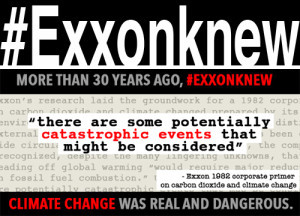 In a classic counter-punch move designed to scare off those trying to hold Big Oil accountable for its actions, Exxon has started suing the lawyers who are themselves suing the company over the #Exxonknew scandal – for misleading the public and investors over the risk of climate change.

Rather than be held accountable for its actions, Exxon, as Bloomberg reports, is taking a “bare-knuckle approach rarely seen in legal disputes”, by suing the legal opposition.

So far some 30 people and organizations have been targeted, including the Attorneys Generals of New York and Massachusetts, who have launched high profile legal cases against the company.

Whereas the company’s critics claim Exxon conspired to keep the dangers of climate change secret, despite knowing the risks, Exxon is now suing its critics, accusing them of their own conspiracy.

The plaintiffs against Exxon include the Attorney General offices of New York and Massachusetts, as well as as New York City, San Francisco and Oakland. In total, seventeen Attorneys Generals are cooperating on investigations into whether Exxon and other oil companies misled investors over climate change.

Many see the countersuits by Exxon as a desperate, but dirty, measure by the oil company to keep the truth hidden. “It’s sort of like a big scare tactic: reframe the debate, use it as a diversionary tactic and scare the heck out of everybody,” argues Sharon Eubanks, a lawyer who was at a meeting six years ago where apparently it was agreed to sue Exxon.  As this meeting was held in La Jolla, in California, this is where Exxon is arguing this is where the so-called “conspiracy” started.

Howard Erichson, a Professor at Fordham University School of Law in New York tells Bloomberg that it is “an aggressive move. Does Exxon really need these depositions or is Exxon seeking the depositions to harass mayors and city attorneys into dropping their lawsuits?”

One of the first lawsuits came last month, when Exxon countersued in Texas. The company said it wants testimony from lawyers suing it claiming that it was trying to prove a “civil conspiracy, and violations of ExxonMobil’s constitutional rights”.

According to attorneys working for Exxon: “It is reasonable to infer that the municipalities brought these lawsuits not because of a bona fide belief in any tortious conduct by the defendants or actual damage to their jurisdictions, but instead to coerce ExxonMobil and others operating in the Texas energy sector to adopt policies aligned with those favored by local politicians in California.”

Further insight, however, comes from Alexandra Lahav, a Professor at the University of Connecticut School of Law, who told Bloomberg: “People often try to use litigation to change the cultural conversation. Exxon is positioning itself as a victim rather than a perpetrator.”

The trouble for Exxon is that there are 30 years of evidence stacked against the company.