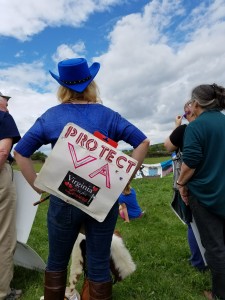 Why Dominion’s ICF report on the economic impact of the Atlantic Coast pipeline never did makes any sense.

This is the first in a series of blogs building on our September 2017 report, Art of the Self-Deal, and responding to rebuttals offered by Dominion Energy’s spokespersons.

When it comes to the Atlantic Coast Pipeline, there’s a fundamental fact that Dominion and Duke seek to distract their customers attention away from but that every utility customer in Virginia and North Carolina should know: it’s you – not Dominion or Duke – who will shoulder the risk and the costs of this unnecessary and dangerous pipeline.

The Atlantic Coast pipeline is a highly profitable scheme that, if approved, would channel money from utility ratepayers through these companies’ utility businesses, to company shareholders via a pipeline entity created for the purpose. This regulated cost-recovery structure — in which utility companies are allowed to pass the costs of infrastructure investments on to their customers — can make sense for ratepayers, for example when it supports capital investments that are needed to deliver low cost and reliable energy. But this is not at all the case for the Atlantic Coast pipeline (ACP).

The issue is not unique to the ACP. In the report we released last month, we outlined how self-dealing, where companies develop pipeline projects to cash in on high returns and sell capacity to their own affiliates, is increasingly used to push through projects that have little clear market justification. Projects such as the Mountain Valley, PennEast and Nexus pipelines were detailed in addition to ACP.

However, it was Dominion Energy’s spokesperson Aaron Ruby who was most vocal in responding in the media to our report, repeating the same misleading talking points at every opportunity.

The ACP case study in our report showed how the project could charge Virginia customers 28% more for services that existing infrastructure could deliver. The following week, testimony was delivered to Virginia’s State Corporation Commission, stating that Virginians could pay between $1.6 and $2.3 billion more for gas transported by the ACP versus receiving the same service from existing pipelines.

In response, Dominion repeated the same talking points it has been using for much of the past two years.

First, the company cites a report it commissioned from a consultancy called ICF, which claims that consumers in Virginia and North Carolina combined could save $377 million over twenty years due to the discounted Appalachian gas the project might deliver.

Second, the company claims that existing pipelines in the region, which are much cheaper to use due to their capital being long since depreciated, are at capacity.

Finally, the company claims that ACP will bring gas to parts of Virginia and North Carolina that currently do not have adequate access to gas.

In this blog, I’ll tackle the first of these and come back to others in subsequent blogs.

Dominion commissioned energy consultancy ICF to calculate the economic impacts of the proposed project. ICF is global consulting firm, based in Northern Virginia, that among other things, conducts research and analysis for government and corporate clients.

The ICF report was published in February 2015 and made several claims about the project’s generation of jobs, income and economic activity, as well as the potential savings in energy costs the project could deliver for consumers in Virginia and North Carolina. In fact, much of the purported job creation derived from the report’s calculation that energy costs would be lowered.

The report claimed that customers in Virginia and North Carolina would save $377 million over 20 years, $243 million of this in Virginia. These numbers have been repeatedly stated by Dominion and other pipeline supporters in promotional materials, opinion pieces and in comments in response to dissent from pipeline opponents.

The numbers are calculated based on the idea that the pipeline will deliver gas from the Appalachian Basin that sells at a discount to gas delivered from the Gulf Coast by existing pipelines. But this assumption is fundamentally flawed. So much so that it is hard to imagine ICF was not aware of at least some of the flaws. But let’s give them the benefit of the doubt for now.

There are three reasons this assumption is flawed:

ICF claimed that as gas production in the Appalachian Basin grows, so would a structural price discount between Appalachian gas (in this case from the Dominion South gas trading hub in West Virginia) and gas from Louisiana (from the Henry Hub), where the Transco pipeline sourced its gas. ICF projected that the price discount at the Dominion South hub would widen to more than $1.50/MMBtu and stay there for much of the 2020s and 30s (see figure). “At these prices,” the report stated, “the Appalachian Basin is among the lowest gas supply sources on the continent.”

But this defies the laws of supply and demand. The reason Appalachian gas has been discounted is that gas production has been growing faster than takeaway pipeline capacity. But as new pipelines are added, the price discount narrows. So, there is no long-term structural discount. Instead, any discount is based on temporary infrastructure constraints. Indeed, every pipeline added, including ACP, will whittle away at that discount. ACP will not give consumers access to discounted gas, but will rather diminish any existing discount by adding pipeline capacity. Not building ACP or other planned pipelines would potentially lead to the widening of a discount, not the other way around.

The U.S. Energy Information Administration (EIA) recently discussed this in its Today in Energy blog in August of this year. The title of the article says it all: “Natural gas pipeline projects lead to smaller price discounts in Appalachian region.”

The EIA blog showed how the price discount between gas from the Dominion South and Henry Hub narrowed in the first half of 2017 as pipeline capacity caught up with production. At one point the discount shrank to $0.33.

While the differential widened again as production overtook new capacity later in the year, the article clearly illustrates that adding pipeline capacity narrows the difference in regional pricing. The EIA cites 25 projects coming onstream in 2017 that it expects will cause prices to move closer again. With more pipelines planned to come online before 2020, including the ACP, it seems far from likely that ACP, should it be built, would deliver gas that will be consistently and substantially cheaper than gas sourced from the Henry Hub.

What about the transportation cost?

Even if some price discount ensues in the cost of gas, the cost of transporting gas through ACP must be factored in. Adding these costs into the equation shows that ACP would cost consumers more money, not less.

Shippers, or companies that pay to move gas through pipelines, sign long-term firm transportation agreements to reserve pipeline capacity. For ACP, the pipeline owners, Dominion, Duke and Southern Company, have signed 20-year contracts with their own utility businesses for over 90% of the pipeline’s reserved capacity. Those utility businesses plan to pass those costs to their captive customers through fuel surcharges. Those contracts are not cheap.

The ICF report did not discuss the costs of these contracts. The contracts are based on tariffs set by the Federal Energy Regulatory Commission (FERC), which allows for a generous rate of return (15%) on top of debt and equity repayment. That last part matters a great deal. Because existing pipeline infrastructure in the region has long since been paid for, the tariffs on existing pipelines are generally much lower than on new ones. The tariff on the Transco line, which has been in the ground for several decades, is $0.53 per dekatherm, while the proposed ACP tariff (including the supply header that feeds gas to project) is $1.88, a difference of $1.35 per dekatherm. This means the shippers, which are all owned by the same companies that own the pipeline, will pay 255% more to ship gas in ACP then they would if they used Transco.

The tables below are taken from our report. They show that once we include the pipeline tariffs, the price of the gas would have to be over $1.35 cheaper at Dominion South compared to competing sources of gas for ACP to save customers money. Based on prices in May this year, when pipeline capacity was roughly in balance with production in the region, the pipeline would cost consumers over $1 per MMbtu or 28% more.

While prices will fluctuate at each hub, it is clear from the evidence above that expecting the difference to cover this higher transportation cost is unfounded.

Finally, there is the issue that the Transco line in Virginia is no longer only moving gas north from the Gulf Coast. ICF somehow missed that the Transco line is also being connected to Appalachian Basin gas, albeit at a different location in Northeast Pennsylvania rather than in West Virginia. In fact, this has already occurred so Transco is flowing Appalachian gas south through Virginia years ahead of what ACP might achieve. According to analysts tracking pipeline flows at BTU Analytics, these flows already reach the Virginia border with North Carolina. If further expansions of Transco occur, Appalachian gas may flow on the Transco line through North Carolina too.

To sum up, it would appear that the entire basis of the ICF report’s calculation that ACP would save consumers in Virginia and North Carolina money is mistaken. Existing infrastructure can deliver the same gas more cheaply than ACP ever will.

In subsequent blogs we will look at whether the existing system is really full, and if areas not served by existing infrastructure really need new gas connections.