Five Nobel Peace Laureates have called on Norwegian Prime Ministerial candidates to declare their intent to put an end to fossil fuel exploration and expansion. The letter, sent in advance of the country’s national elections in mid-September, is an appeal for climate leadership.

But, they are also the world’s seventh largest exporter of emissions. Their plans for exploration and expansion of new fossil fuel reserves are wholly inconsistent with what is necessary for the Paris climate goals (see figure 1). Efforts and action to tackle domestic demand dominate, ignoring the other critical half of the equation: supply and production. 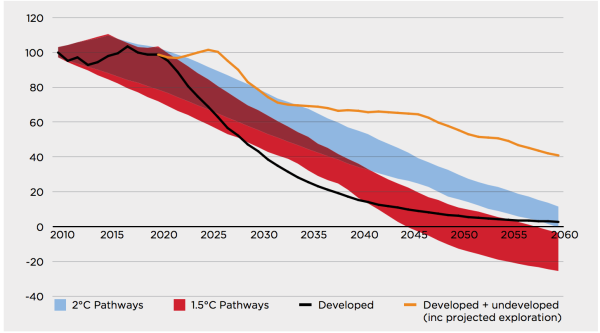 Figure 1: Rates of change (base year 2010 = 100) of global emissions in a range of 1.5 or 2 degree Celsius scenarios, and of emissions from Norwegian developed and undeveloped oil and gas fields.

Like other countries (h/t Canada), there is a dangerous disconnect between a stated need for climate action, and continued plans for fossil fuel development. At a time when countries must be planning for a just transition and a managed decline of their fossil fuel sectors, Norway is doing the opposite: it is looking for ways to keep adding new reserves to the mix.

“Equity and justice in the face of the climate crisis requires nations like Norway to prove the possibility of the end of a fossil-fuel based economy. Recent analysis confirms that there is no room in our shared atmosphere for new extraction of oil, coal, and gas. And yet Norway continues to plan for new production, with proposed expansions that contain 150% more greenhouse gas emissions than already committed through existing projects.” 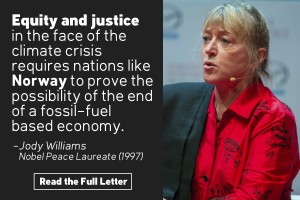 Electric cars and carbon pricing aren’t enough if you aren’t prepared to tackle the problem at its source. In this century, you can’t be both a climate leader and a massive fossil fuel exporter at the same time. Leadership now means showing the world that it is possible to transition economies off of oil, coal, or gas.

Norway has benefitted enormously from fossil fuels. It has managed its oil production and wealth better, arguably, than anywhere else in the world. It has saved close to a trillion dollars in the world’s largest sovereign wealth fund, and has largely proceeded with foresight and consideration in the development of the sector.

Now it is time to apply that same foresight and planning to map a managed decline of its oil and gas sectors. It must use the incredible wealth it has generated to ensure workers, communities, and economies are protected as they transition away from a dependency on fossil fuels. After all, if Norway can’t figure out how to make this work, who can?

The Laureates note the important relationship between the Peace Prize and the country of Norway, noting that, “Alfred Nobel felt strongly that Norwegians embodied an understanding of peace, equity, and justice that uniquely qualified them to judge the prize. We appeal to those values now.”

“It is easy to seek cover behind countries that are larger emitters, bigger producers, or egregious laggards, but it is not right. Leadership in this century will be characterized by those who redefine themselves in a clean energy economy and who cease to profit from perpetuating the climate crisis. We believe Norway can be this leader,” the letter concludes.

The signatories to the letter include:

You can read the release and the full letter here. You can also read our recent report: The Sky’s Limit Norway, here.