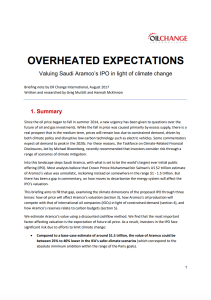 Written and researched by Greg Muttitt and Hannah McKinnon.

Coming two years after the Paris Agreement, the initial public offering (IPO) of Saudi Aramco will be strongly shaped by climate change. Most analysts believe that Crown Prince Muhammad bin Salman’s US $2 trillion estimate of Aramco’s value was unrealistic, reckoning instead on somewhere in the range $1 to 1.5 trillion. But there has been a gap in commentary, on how moves to decarbonise the energy system will affect the IPO’s valuation.

Oil Change International’s new briefing aims to fill that gap, examining the climate dimensions of the proposed IPO through three lenses: How oil price will affect Aramco’s valuation (Section 3), how Aramco’s oil production will compete with that of international oil companies (IOCs) in light of constrained demand (Section 4), and how Aramco’s reserves relate to carbon budgets (Section 5).

The IPO is thus a real test of whether investors are thinking seriously about climate change. A high valuation, say above $1 trillion, would indicate they are betting on a failure to address climate change, through an expectation of high future oil demand. Investments in the IPO could then be at significant risk.

The question of whether Aramco is advantaged relative to international oil companies (IOCs) because of its low production cost depends on the shape and timing of climate policy. If governments continue to drag their feet on reducing emissions, IOC production will remain viable for longer, and assuming governments ultimately act to keep warming below 2ºC, a large proportion of Aramco’s reserves may be left unburned. However, this scenario would also entail rapid emissions cuts later, forcing down prices within investment timescales of 15 to 25 years, and causing significant destruction of oil company assets. As such, it creates the greatest financial risk to all.

The world is rapidly approaching climate limits. There is an urgent need for rigorous scrutiny of any new investments in fossil fuels, not least of the partial listing of the world’s largest oil company.