The Alberta tar sands are among the world’s largest oil reserves. While investment and expected growth in the industry have been high for the last decade, new industry data paints a dramatically different picture of the sector moving forward. 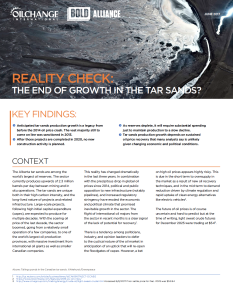 These have significant implications for ongoing pipeline, climate, and financial planning discussions both at government and industry levels.

For more details on pipeline capacity in the tar sands, see Lockdown: The end of growth in the tar sands. More more on the role of tar sands infrastructure for Canada’s climate commitments, see Climate on the Line: why new tar sands pipelines are incompatible with the Paris climate goals.