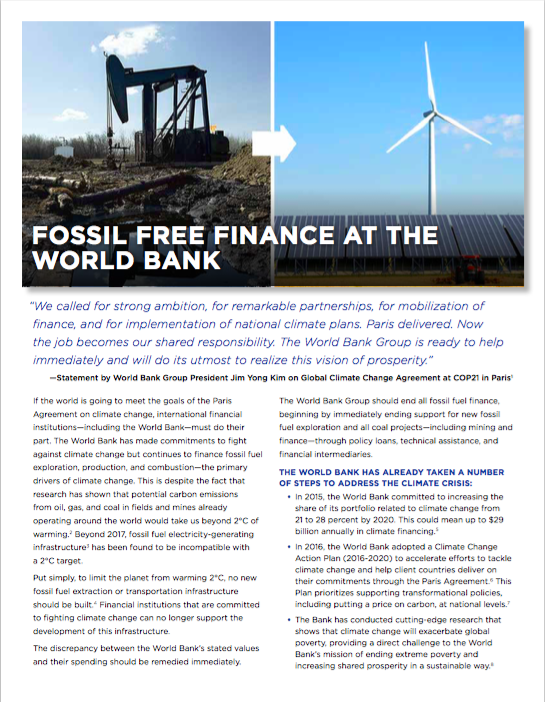 If the world is going to meet the goals of the Paris Agreement on climate change, international financial institutions—including the World Bank—must do their part. The World Bank has made commitments to fight against climate change but continues to finance fossil fuel exploration, production, and combustion—the primary drivers of climate change. This is despite the fact that research has shown that potential carbon emissions from oil, gas, and coal in fields and mines already operating around the world would take us beyond 2°C of warming.

Beyond 2017, fossil fuel electricity-generating infrastructure has been found to be incompatible with a 2°C target. Put simply, to limit the planet from warming 2°C, no new fossil fuel extraction or transportation infrastructure should be built. Financial institutions that are committed to fighting climate change can no longer support the development of this infrastructure.

• In Fiscal Year 2015, the World Bank Group financed over $313 million in projects that included fossil fuel exploration and over $2 billion in fossil fuel projects in total.

• The World Bank Board is considering a new proposed coal-fired power plant in Kosovo. Since Kosovo has cleaner energy alternatives, this project would violate the World Bank’s commitments to stop financing greenfield coal power generation except in “rare circumstances.” The World Bank Group has committed support to the Trans-Anatolian Natural Gas Pipeline Project, which will transport gas from Azerbaijan to the border with Greece, via the length of Turkey.