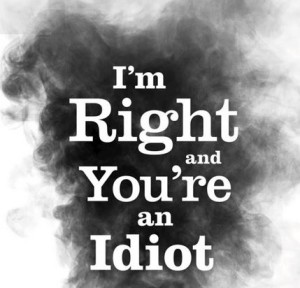 As Donald Trump and Hillary Clinton campaign in one of the most deeply bruising, personal and vitriolic Presidential campaigns ever witnessed, many are questioning the current venomous state of our polarized political discourse and how it needs to radically change.

Occasionally you read a book that offers real solutions mapping out how some of that change could happen.

James Hoggan is well known in the environmental movement as one of the founders of the ground-breaking Desmogblog and also as co-author of the best-selling book Climate Cover-Up, which is essential reading for anyone tracking the climate denial movement.

For years Hoggan, along with Grania Litwin, has been working on another book/ project, provocatively and rather ironically called: I’m Right and You’re an Idiot which started by wanting to take a deeper look at the history and techniques of propaganda and trying to answer a simple question:“Why aren’t people demanding action on environmental issues like climate change, despite the overwhelming evidence?”

As Hoggan explains: “I was angry about the pervasive propaganda and underhanded public relations trickery I was witnessing, deceit that conceals the gravity of so many environmental issues. Few speak out about this dark art, and I was keen to expose its perils, the spell it casts over unsuspecting victims.”

However, the book soon grew into something much bigger and more complex: how to create the space for higher-quality public discourse, where passion and science shape the conversation, not scaremongering and gutter politics.

He has spoken to some of the world’s great thinkers, philosophers and academics. He weaves their thoughts and views into a powerful narrative. Hoggan starts off by examining what he calls the polluted public sphere, and how a “caustic discourse” now dominates much of the public debate whether it be on energy, climate change, or other topical issues such as immigration or gun control.

Indeed, Naomi Oreskes, Professor of the History of Science, Harvard University, and author of Merchants of Doubt says the book is a “must-read for anyone trying to break the climate impasse, or indeed, make progress in any domain of social conflict.”

As Hoggan outlines: “As a PR specialist I have spent 30 years dealing with tough issues, straddling the worlds of government and industry, business and the environment, and I see this dysfunctional dialogue and corruption in the public square as not only a pressing problem, but also a threshold problem”.

The problem with this type of debate is that “people lose interest, lose hope or simply lose the thread of what they’re being told. And this leads to escalating polarization and eventually to gridlock.”

Take the issue of climate change, which is “a perfect storm” when it comes to communication, because “it involves a broad array of stakeholders, people with differing values, frameworks and levels of education — all being whipped up by winds of passion and emotion”.

Instead of weighing facts fairly, disagreeing constructively and thinking things through cooperatively, “we have forces at work to halt the vital steps we should take to save our precious ecosystems”, writes Hoggan. “We need vigorous debate and people speaking out with passion.”

Both the media and academics have been at fault over climate, with scientists needing to become “more political because pure evidence — facts, figures and flow charts — cannot form an adequate basis for public debate”:

“We have very gifted experts offering abstract, technical, difficult, highly qualified statements, and a media that presents what these people say in the form of controversy … The scientific community assumes the same rules of communication are always applicable and rational, that people are attentive, open-minded, persuaded by facts and believe that those who are presenting information are people of goodwill, and not deliberately trying to manipulate them. But none of those things are true”.

Hoggan believes: “It is only when we understand these elements that underpin much of the public debate that surrounds climate change, say inattention, mistrust and polarization, does it become clear why the truth about global warming has become so distorted.”

Carol Tavris, one of those interviewed in the book, and co-author of Mistakes Were Made (but not by me) asks the question: “I assume you want to know why many people aren’t receptive to the message of global warming, right?”

She says: “People don’t want to acknowledge the danger to the world because of the economic consequences to their work, to their families, to their ways of life. That’s a huge and realistic concern.”

Hoggan outlines how: “Fundamentally, people are resistant to climate change data because of the human resistance to changing our mind, the psychological response to fear messages — especially fear messages we can’t do anything about — and the inherent biases in human perception. These are biases that make us seek and remember information that confirms what we believe — and reject, distort or forget information that dis-confirms what we believe.”

We also have to look at wider systemic problems, such as the role of companies and governments. One of those interviewed is Joel Bakan, the author of The Corporation. “Today’s corporation, as an institution, lacks any intrinsic or internal ability to constrain itself morally or ethically” he says.

Others agree. Another iconic interviewee is Noem Chomsky, who argues: “Market systems are designed to create lethal catastrophes.” Chomsky adds:  “The government is not our government. It is not a government of the people. It’s a government of the overwhelmingly rich, of the corporations and the wealthy. . . . And so it does what they want.”

Chomsky points out that the American public favors higher expenditures and efforts to deal with climate change, but that doesn’t matter. “What matters is what the rich and powerful think.”

Joel Bakan believes change is possible, but the solution ultimately has to come from us: “We need to feel we have the right and the obligation as citizens in the public domain of democracy to do something about this.”

The book ends with several ways that the adversarial nature of public debate in the US can be broken down. Some of this might make uncomfortable reading for campaigning organisations, who are urged to be less conforontational and to perhaps change their messaging.

“The present policy environment is shaped by the political power of the coal-oil-gas-utility lobby, but activists play into their hands by making the argument about the environment, which simply is not a top-level political issue in the US,” argues Hoggan. “However, economic revitalization and employment, technological leadership and national security are issues that can move political consensus.”

At the end, the book will make people think there could be new and innovative ways to tackle the great challenges of our time, like climate change, because the window for radical action is rapidly running out.

Find more on the book here.