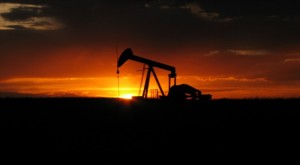 All eyes this morning will be on the half-yearly OPEC meeting in Vienna.

Although pundits are not expecting a production freeze, the oil price is creeping towards $50, up 80 per cent since its slump of $30 in January.

As the press pack hunt the OPEC oilmen round Vienna searching for clues on any cutbacks,  commentators have noted that the recent oil price increase has meant the “feel-good” factor is returning to the industry and investors.

Some are even speculating that oil may even reach $60 in the next few months.

Whilst the price increase will give the industry a short respite, it cannot hide the brutal truths that this is an industry with no future, no matter what happens in Vienna.

Last week was a bruising one for Big Oil with Shell, Exxon and Chevron all facing hostile share-holders concerned about climate change.

For any oil executives hoping that their weekend reading would give them light relief, they would have been dismayed at the editorial in the Financial Times, entitled: “The long twilight of the big oil companies”.

Coming from a paper as influential to the business community as the Financial Times, this is yet another cold wake-up call for the industry.

As the editorial points out, despite their boards being stuffed with some of the brightest minds in business, the “oil companies have not yet reconciled themselves” to quite what keeping climate change to “well below” 2C actually means.

“If governments stick to that commitment, fossil fuel companies will either have to find ways to stop greenhouse gas emissions from their products, or shift into renewable energy, or go out of business,” says the paper.

The writing has been on the wall for Big Oil for decades.

It does not take one editorial in the Financial Times for the industry to realise that the hydrocarbon age is coming to an end. Our reaction to climate change is irreconcilable with Big Oil’s long-term future.

Moreover it is not the first time that the paper has told Big Oil that its days are numbered. Just three months ago, in a strongly worded lead editorial today, The FT warned the industry that “reinvention” is needed to survive. Then the paper argued that Big Oil could “seize the opportunity in climate policy” and invest more in renewable energy.

Last week, at their respective AGM’s, it was the ideal time for the oil companies to tell the public and share-holders about how they had reacted to the UN-Paris climate conference and were now radically investing in renewables.

Of course that did not happen. The reaction of Rex Tillerson, the Exxon boss, was as backward and regressive as ever. Tillerson argued that cutting oil production was “not acceptable for humanity” before adding “The world is going to have to continue using fossil fuels, whether they like it or not.”

The bottom line is that the industry has known about climate change for decades, it has just chosen the wrong business strategy to respond to it.

That is why Exxon poured tens of millions into its climate denial campaign and why it now finds itself under numerous investigations. All it was doing was delaying the inevitable, by denying the evidence, delaying legislation and trying to dominate the public discourse around climate.

It is of course the classic 3-D PR strategy straight of Big Tobacco’s playbook, which has been so expertly exposed by the Union of Concerned Scientists, academics such as Naomi Oreskas, Michael Mann, and campaigners such as Kert Davies, Cindy Baxter and so many others. It has also become the scandal known as #Exxonknew.

Kudos also should go to the numerous campaign groups that have led the #KeepitintheGround movement such as 350.org (as well as OCI) and think tanks such as Carbon Tracker that have pushed the concept of “stranded assets” and the fact that we can never burn all the remaining oil, if we are going to keep climate change to 2C limit.

Big Oil’s belligerent reaction to climate change is set to lose their share-holders billions and means they will lose out in the new great energy game of the 21st Century.

Indeed, the FT concludes: “Instead of railing against climate policies, or paying them lip-service while quietly defying them with investment decisions, the oil companies will serve their investors and society better if they accept the limits they face, and embrace a future of long-term decline.”

Nowhere will the threat of climate be more felt than in Canada, where many people are rethinking the country’s energy strategy after the devastating McMurray fire.

And now a federal Government think tank, which gives advice to the Government, is warning that the country’s status as an “”energy superpower” is under threat due to the declining use of fossil fuels and growth of renewables.

The report, published by Policy Horizons Canada, concludes: “It is increasingly plausible to foresee a future in which cheap renewable electricity becomes the world’s primary power source and fossil fuels are relegated to a minority status”.

The report makes worrying reading for those investing in the carbon-munching tar sands. It is also another indicator that Big Oil’s twilight could happen faster than many have predicted.