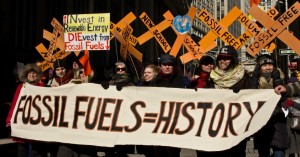 The famous quote attributed to Benjamin Franklin is that “In this world nothing can be said to be certain, except death and taxes”.

Another certainty is that you know that the top executives of controversial companies absolutely hate the one day in the year that they are accountable to their shareholders: the AGM.

It is a day to be endured under extreme duress. A day when normally aloof executives have to answer awkward questions. There is no escape. There is no spin doctor to wheel out instead. The chief executive and chairman have to go face to face with the public. And it can hurt.

Often the questions are over ridiculously high pay levels. In addition, Big Oil executives are used to being quizzed on a whole host of other abuses: over the years answering why they were propping up apartheid; polluting the coasts of Alaska; colluding with the military who were murdering their critics in Nigeria; over-stating their reserves; polluting the Gulf of Mexico or spending silly money looking for oil in the Arctic. I could go on.

And that is before we get to the thorny issue of climate change and stranded assets and pouring invaluable shareholder money down a big black hole.

The companies are coming under increasing criticism over their flawed long-term business strategy.

Just last week, the influential Economist Magazine reported that “it has been a grim decade for investors in international oil firms—among them, many of the world’s biggest pension funds. Even before oil prices started to fall in 2014, the supermajors threw money away on grandiose schemes: drilling in the Arctic and building giant gas terminals.”

The magazine continued that “Not only do the supermajors need to brace for the possibility of a renewed slide in oil prices in the short term; they must also prepare for a future in which oil demand is increasingly uncertain because of climate change, pollution and the emergence of alternative sources of energy.”

The article finished by concluding that “investors may pressure” the companies from “thinking differently” that the world “will want more hydrocarbons”.

And this is happening. At its AGM this month, Exxon will face further questioning over climate change.

Along with Chevron, the board of Exxon is being urged by over 1,000 leading academics from some of the world’s top Universities to vote in favour of resolutions which are demanding greater openness by the oil giants on how climate change impacts their business strategy.

The letter says: “Climate change poses financial risks, and investors need better disclosure to understand and price those risks.” Lily Tomson from Positive Investment, from the coalition behind the letter to Exxon, argues: “This is a chance to change the trajectory of two of the largest fossil fuel companies in the world.”

There are those who argue that Exxon and the other oil majors are running out of time to change, though. Professor Paul Stevens from the Chatham House think tank in London, argues that Big Oil has about ten years to figure out a new business model. If they do not adapt to climate change they could face a rapid and and “brutish” decline within a decade.

Stevens argues that “this would require a major change in the corporate culture” of Big Oil; however, it “remains to be seen whether their senior management could handle such a fundamental shift.”

So far Exxon’s senior management are adopting the age old “head in the sand” response and the company’s board has so far advised shareholders to vote against the measures over climate at the AGM on May 25.

Meanwhile, after months of intense pressure, the Bill and Melinda Gates Foundation has dumped its entire $187 million holding in BP. “We are thrilled that the Gates foundation continues to divest from fossil fuel stocks, but it’s time to divest the rest,” said Alec Connon, an organiser for the Gatesd Divest campaign, based in Washington state.

Other large investors are being urged to follow suit adn divest their fossil fuel stocks.