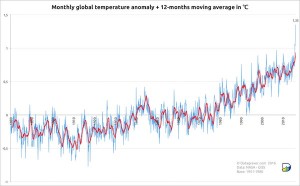 Last week, I blogged about how “nearly every day another record is smashed regarding climate change.” Well another record has just been smashed and we should all sit up and take notice.

According to data released by NASA, the temperature record for February has been broken by an “unprecedented” amount. The scientists have found that February was 1.35C warmer than average.

Having analysed the data, writing on the Weather Underground blog, Jeff Masters and Bob Henson noted that:

“On Saturday NASA dropped a bombshell of a climate report. February 2016 has soared past all rivals as the warmest seasonally adjusted month in more than a century of global recordkeeping.”

They added: “This result is a true shocker, and yet another reminder of the incessant long-term rise in global temperature resulting from human-produced greenhouse gases.”

Climate scientists are getting more vocal in speaking out about the climate crisis that is occurring right now: “We are in a kind of climate emergency now,” Stefan Rahmstorf, from Germany’s Potsdam Institute of Climate Impact Research, told the media. “It’s completely unprecedented.”

There are those within the oil industry that argue that due to climate change we should transition away from dirty coal and oil to gas as soon as possible.

They argue that gas – much of it from fracking – is the cleanest fossil fuel, which can act as a so-called “bridge” between the dirtier fossil fuels and cleaner renewables.

I and many others have long argued that this is a flawed argument for a multitude of reasons, not least that fracking has large emissions of methane, one of the most potent greenhouse gases.

I have also pointed out that fracking continues our reliance on fossil fuels generally, just at a time when we should be de-investing from fossils.

For example, just last month I blogged that: “Fracking has long been linked with the emissions of methane too.”

I reported on new academic  research published by Harvard University in the journal Geophysical Research Letters which concluded “that US methane emissions have increased by more than 30% over the 2002–2014 period.” This methane spike has coincided with the fracking boom across the US.

Well now respected environmental journalist Geffrey Lean, writing in the Independent, reports on another down-side of the fracking boom: The rise of carbon-intensive infrastructure and industries which all have a climatic impact.

He reports “fracking is set to lead to a sharp rise in emissions of climate changing greenhouse gases, newly undermining industry and government claims that shale gas is a relatively clean fuel that can help combat global warming, an authoritative new study reveals.”

The new study, entitled, “Greenhouse Gases from a Growing Petrochemical Industry” was led by a former director of the US Environmental Protection Agency’s (EPA) Office of Civil Enforcement, who now heads the Environmental Integrity Project.

The study concludes that cheap shale gas is encouraging the development of other energy-intensive infrastructure and industries which in turn produce vast amounts of carbon dioxide.

If you add up the emissions of CO2 from LNG storage and processing plants, new fertiliser projects, new chemical plants and refineries in the US, this comes to almost 86 million tons a year of CO2.

The report concludes this is equivalent to 19 coal-fired power plants.

Lean concludes: “The new study strikes another blow at the strategy of both the US and British governments to rely on shale gas as a relatively clean ‘bridge’ from dirty fossil fuels to non-polluting renewable sources”.