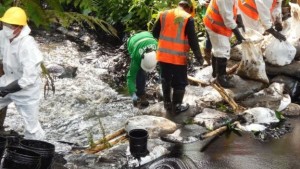 There is growing outrage over pollution of two important rivers after three oil spills in the Peruvian Amazon.

The spills are said to be causing serious ecological and health problems for the local Indigenous communities.

At least 3,000 barrels of crude oil have been spilled after at least three leaks from Peru’s main oil pipeline.

It could take up to a year to clean up the rivers in the ecologically sensitive region.

The first leak started in late January and the second in February. A new, third leak has also been reported recently.

The oil has polluted two rivers – the Chiriaco and Morona – which are in the North West of the country. They are relied upon by at least eight Achuar communities for water. Some 8,000 people live in the affected area.

“People in the communities are suffering from dizziness and vomit because of the obnoxious smells,” said Edwin Montenegro, president of the Regional Organization of Indigenous Peoples of the Northern Amazon of Peru.

One local resident added: “Fish have died, crocodiles have died, plants have died,” before asking “How are we going to live?”

The state oil company, Petroperu, whose decades-old corroding pipeline has ruptured, is promising to undertake a full clean up.

However the situation is so bad that the country’s Health Ministry has declared a “water quality emergency” is five districts.

Officials from OEFA, the country’s environmental regulator, argue that Petroperu could face fines of up to $17m if the health of local communities has been affected.

It is obviously an ongoing area of concern as OEFA said the spills were “not isolated cases. Similar emergencies have emerged as a result of defects in sections of the pipeline.”

The ecologically and culturally sensitive Amazonian region of Peru has been plagued by oil spills, with at least eleven in the region since 2010.

In response to the spills, activists have been staging protests outside Petroperu’s headquarters in Lima.

The protests were led by local actor and playwright Richard Torres: “It’s a crime that has no forgiveness,” said Torres. “Flora and fauna are dying and all because of damned money, the power and the ego of a few people that rule my country.”

The campaign group, AmazonWatch is now asking people to email the President of Peru to force the country to “respect human rights and the environment and stop all oil operations in the affected areas until the pipeline is replaced.”

Amazon Watch adds: “The government must completely cleanup all affected areas and provide compensation for communities. To prevent further negligence, Peru must also hold accountable the people responsible for these actions.”