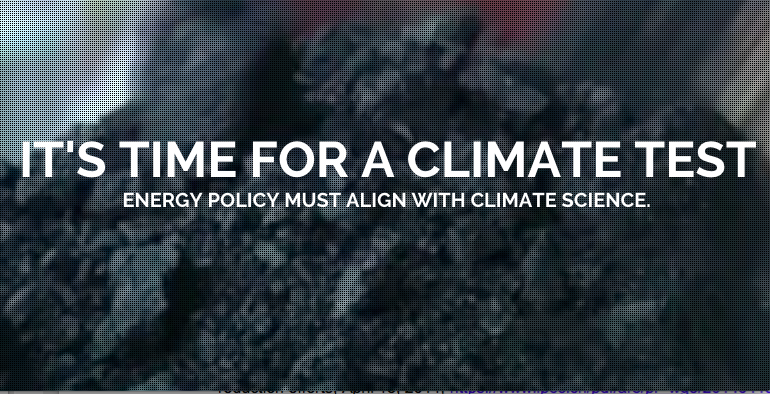 Today, with a number of our partner organizations in the US and Canada, we’re unveiling the Climate Test. This is a proposal being delivered jointly to President Obama and Prime Minister Trudeau calling on them to align their governments’ energy policy and decision-making with the demands climate science has laid out for us and the international climate agreements our leaders have forged.

This test is actually not new; in fact President Obama has implemented it himself already in consideration of the Keystone XL pipeline. When he made his major climate speech at Georgetown University in June of 2013, he said:

“Our national interest will be served only if this project does not significantly exacerbate the problem of carbon pollution.  (Applause.)  The net effects of the pipeline’s impact on our climate will be absolutely critical to determining whether this project is allowed to go forward.  It’s relevant.”

Canada’s new Prime Minister Trudeau has also promised a climate test when it comes to reviewing major infrastructure projects like pipelines, a commitment that was reiterated just weeks ago.

We support this kind of leadership on both sides of the border – as long as it is ambitious and robust enough to match our promises and the climate’s needs.. We must consider the climate when making energy policy decisions. That’s why we’ve worked with our partners to elaborate this idea further and are excited to be putting it out into the world today.

The climate test we are unveiling today calls on our governments to use the latest climate science to evaluate all proposed energy supply and demand policies and projects in light of the globally agreed goal of limiting global warming to 1.5?C, informed by the spirit of global cooperation that made Paris successful.

Right now, our energy policy is based on an outdated model that suggests business as usual for years to come and thus continued burning of fossil fuels at levels that would mean climate catastrophe. Commonly used energy projections such as the EIA’s Reference Case, the IEA’s Current or New Policies Scenario, or energy outlooks produced annually by oil companies such as Exxon or BP, would see fossil fuel use leading to between 4 and 6 degrees Celsius of warming. Make no mistake, a world with 4 to 6 degrees Celsius of warming would be one we would barely recognize, let alone inhabit safely.

Yet, just a few months ago in Paris, world leaders adopted the important aim of limiting global warming to 1.5 degrees Celsius. This was an important achievement and marks a pivotal moment in the fight to save the climate. But if we are actually going to meet that goal, it’s far past time we started acting like it.

The Climate Test demands, quite simply, that President Obama and Prime Minister Trudeau show the leadership required to make the lofty goals from the Paris Agreement a reality.

The science behind limiting warming to 2?C is clear. The vast majority of proven fossil fuel reserves must be kept in the ground and we must decarbonize our economies no later than 2050. For 1.5?C we must go even further, faster.

We must assume success in achieving our climate safety objectives, and work from that assumption when assessing proposed fossil fuel projects. We must apply the climate test.

Read more about the climate test at http://climatetest.org