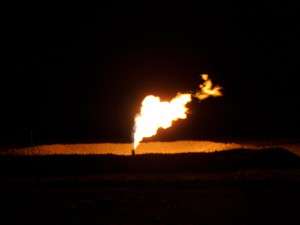 One of the main arguments that the pro-frackers put forward about adopting the controversial technology is that it is a clean, secure fuel that can be used to bridge the gap between dirtier fossil fuels and cleaner renewable energy.

However, the industry’s critics argue that that this position has more holes in it than a Swiss cheese. Firstly, they argue, the transition to clean energy should begin now rather than building new fossil fuel infrastructure; and secondly gas is not as clean as its proponents argue, being responsible for significant amounts of local water and air pollution.

And talking about air pollution we come to what many see as fracking’s Achilles heel when it comes to climate change: fugitive emissions of methane, the highly potent greenhouse gas.

Emissions of methane have been thrust into the national spotlight in the US in recent months due to the leaking Aliso Canyon gas leak in California, which pumped methane into the atmosphere for three months before being plugged. The disaster caused the evacuation of thousands of local residents, many of whom complained they had become sick.

Fracking has long been linked with the emissions of methane too.

For example in April 2014, new research, published in the Proceedings of the National Academy of Sciences, revealed that fracking wells in southwestern Pennsylvania were releasing methane into the atmosphere at rates that were 100 to 1,000 times greater than estimated by US regulators.

“It is particularly noteworthy that large emissions were measured for wells in the drilling phase – in some cases 100 to 1,000 times greater than the inventory estimates,” argued Paul Shepson, a professor of chemistry and earth atmospheric and planetary sciences at Purdue University, a co-author in the study.

As I noted in a blog at the time, the research means “that shale gas should not be seen as a bridging fuel to a clean energy future.”

This month new research published by Harvard University in the journal Geophysical Research Letters concludes “that US methane emissions have increased by more than 30% over the 2002–2014 period.”

The academics argue this release of such a large amount of methane could account for anywhere from 30–60% of the global growth of atmospheric methane seen in the past decade. That is a huge contribution to global climate change.

Although the scientists are at pains to argue that they “cannot readily attribute it to any specific source type” due to too little data, pundits at Grist have been quick to point out that the methane spike “occurred at the same time as America’s shale oil and gas boom, which has been associated with large amounts of methane leaking from oil and gas wells and pipelines nationwide.”

Academics concur. Robert Howarth, a Cornell University ecologist and methane researcher who is unaffiliated with the Harvard study told Grist that the “increase almost certainly must be coming from the fracking and from the increase in use of natural gas.”