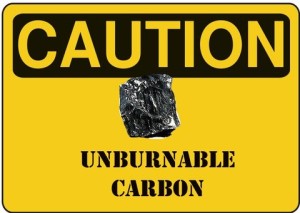 For years a growing number of voices – from activists, analysts and scientists – have been warning that we cannot afford to burn all the reserves of fossil fuels if we are going to keep global warming to 2 degrees.

They argue that huge amounts of oil, coal and gas risk becoming “stranded assets”, which can never be burnt.

But some voices carry more weight than others.

And last night, Mark Carney, the Governor of the Bank of England “threw down the gauntlet to the fossil fuel industry” about the risks to investors over climate change and that vast reserves may be “literally unburnable”.

In what is being seen as a game-changing speech, the Governor echoed the warnings that many fossil fuel reserves risk becoming “stranded assets”.

Speaking to the insurers Lloyds of London, he warned about the risks of climate change – or as he called it – the “tragedy of the horizon”.

Carney noted that “while there is always room for scientific disagreement about climate change”, he had found “that insurers are amongst the most determined advocates for tackling it sooner rather than later.”

And little wonder, he noted. As others debated the science, the insurers have been picking up the tab: since the 1980s the number of registered weather-related loss events has tripled; and inflation-adjusted insurance losses from these events have increased from around $10bn in the 1980s to around $50bn over the past decade.

“The challenges currently posed by climate change pale in significance compared with what might come”, the Governor cautioned, adding that: “The far-sighted amongst you are anticipating broader global impacts on property, migration and political stability, as well as food and water security.”

Given the risks, he asked a simple question: “Why isn’t more being done to address it?”

Basically because companies, banks and governments are all thinking about short-term self-interest rather than the long term good: “We don’t need an army of actuaries to tell us that the catastrophic impacts of climate change will be felt beyond the traditional horizons of most actors – imposing a cost on future generations that the current generation has no direct incentive to fix,” he said.

Addressing the issue of stranded assets he outlined how the Intergovernmental Panel on Climate Change’s estimate of a carbon budget “would likely limit global temperature rises to 2 degrees above pre-industrial levels”.

As that budget “amounts to between 1/5th and 1/3rd world’s proven reserves of oil, gas and coal,” Carney warned that “if that estimate is even approximately correct it would render the vast majority of reserves ‘stranded’ – oil, gas and coal that will be literally unburnable without expensive carbon capture technology, which itself alters fossil fuel economics.”

The Governor had a bleak warning: “The exposure of UK investors, including insurance companies, to these shifts is potentially huge.”

But he added that by the time “climate change becomes a defining issue for financial stability, it may already be too late.”

He finished his speech outlining how “our societies face a series of profound environmental and social challenges,” and how climate change “will threaten financial resilience and longer-term prosperity.”

Finally Carney said simply: “While there is still time to act, the window of opportunity is finite and shrinking.”

And that window could close if there is not a significant global deal to reduce greenhouse emissions at the UN conference in December in Paris. The clock is ticking.