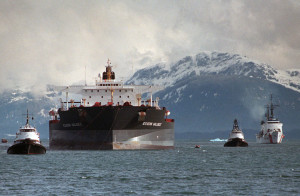 There are many contradictions about Shell’s Arctic misadventure to drill for oil, but three are the most striking: Firstly the company is spending billions of dollars and risking the reputation of the company on oil that can never be burnt.

Secondly, Obama having just allowed the company to start drilling in the Arctic, then visits the region to warn about climate change; something that his Administration has just made worse.

And thirdly, Shell says it can adequately clean up any spill in the region, if there is an accident. That last promise is for want of a better word, a lie. The only way to clean up a spill in the Arctic is not to spill oil in the first place. The bottom line is that any oil spilt in the Arctic may never be cleaned up, and its legacy may last decades, or even longer.

It is not that we have not been warned. The catastrophic Exxon Valdex oil spill in 1989 in Prince William Sound, which spilled over eleven millions gallons of oil, has given us more than enough evidence that the Artic should be left alone.

And even now – some twenty six years after the disaster in March 1989 – that evidence continues to grow. And a new study released this week yet again raises alarm bells. And yet again it reveals why Shell should never be allowed to drill in the Arctic, as the ecological risks are just too high.

The study, published in Scientific Reports, reveals that embryonic salmon and herring exposed to even very low levels of crude oil can develop hidden heart defects that compromise their later survival. They found that thresholds for harm for fish from crude were “remarkably low.”

What this means that even now decades later we are only just realising that the spill may have had much greater impacts on spawning fish than previously recognized.

What is well documented is that three to four years after the spill the local herring population crashed. Pink salmon stocks also plummeted. Even though many suspected the spill being to blame, evidence of what many people regard as a conclusive link has been missing.

And what the new research reveals is that fish are even more sensitive to crude oil than previously thought, and that the crude oil damaged their hearts even though they may have looked outwardly normal. This would then impact their chances of survival.

Nat Scholz, leader of NOAA’s Northwest Fisheries Science Center in Seattle and a coauthor of the new study argues that “Our findings are changing the picture in terms of assessing the risk and the potential impacts of oil spills.”

Scholz adds that “we now know the developing fish heart is exquisitely sensitive to crude oil toxicity, and that subtle changes in heart formation can have delayed but important consequences for first-year survival, which in turn determines the long-term abundance of wild fish populations.”

What is also deeply worrying according to John Incardona, a research toxicologist at NOAA’s Fisheries’ Center in Seattle is that although the juvenile fish look completely normal on the outside, their hearts are not functioning properly.

This means they have a much reduced survival rates. “In terms of impacts to shore-spawning fish, the oil spill likely had a much bigger footprint than anyone realized,” he argues.

Another scientist Mark Carls, toxicologist at the Alaska Fisheries Science Center adds simply. “Crude oil is changing basic physiology, or what makes a fish a fish.”