We reported in our June Newsletter that the difference in price between the Canadian heavy oil benchmark Western Canadian Select (WCS) and the U.S. light crude benchmark WTI had narrowed to $8 a barrel (bbl). This was remarkable in light of the much wider differential of $15-25/bbl that had become common since around 2010 (see Figure 1). 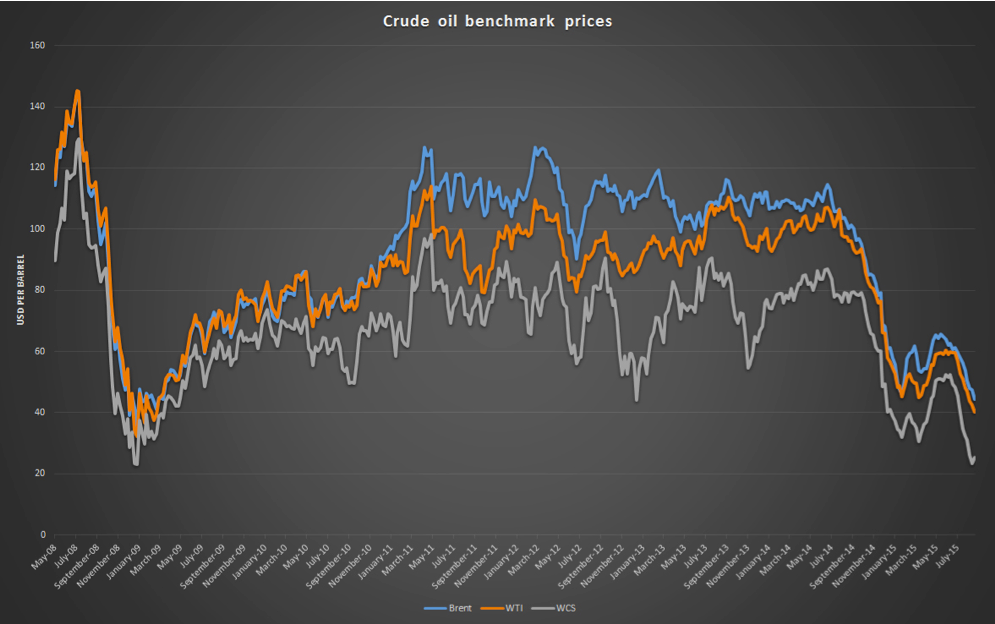 We noted back in June that much of this narrowing was down to projects coming off-line rather than new pipeline capacity. This was due to project maintenance at upgraders reducing the amount of Canadian crude entering the limited pipeline system and was being made worse by forest fires in Alberta that knocked out some 300,000 bpd of production in the Cold Lake area. Looking back we can see now that these factors caused the differential to narrow further to a low (or high depending on how you look at it) of $7.50/bbl by early June (see Figure 2.)

But you can also see in Figure 2 that this did not last. Back in June we said that we did not expect it to but we did not foresee that WCS-WTI would be back to almost a $20/bbl differential. Neither did we foresee the double whammy of global prices dipping further at the same time. All in all, it’s been a rough summer for tar sands producers with many operating at a loss as the value of their product dived. 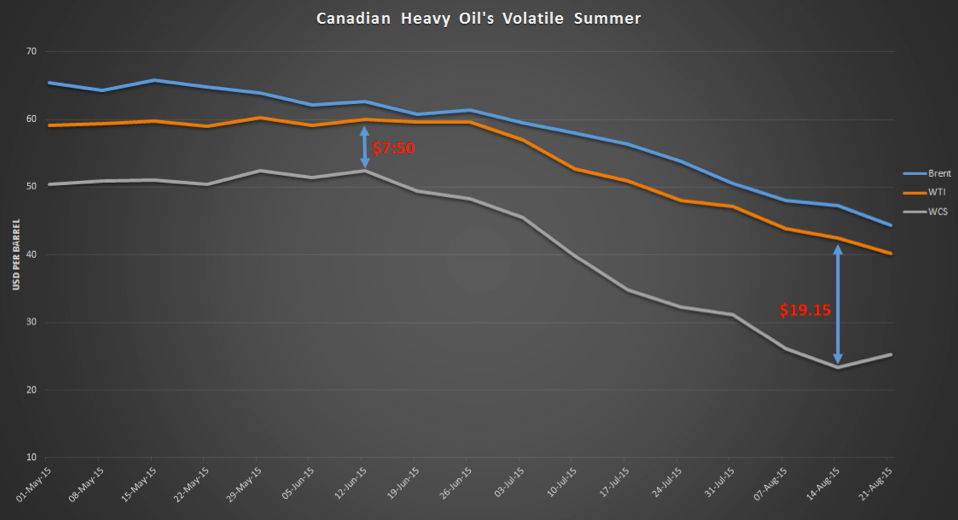 We’re not shedding any tears for the dirtiest oil producers on the planet but it is interesting to look at what happened and where things may go in the coming months.

Essentially, as we predicted, the upgrader maintenance ended and the fires were put out and that production all came back on line. With no new pipeline capacity to carry this crude to market this alone was likely to push the differential back out to the $12-15/bbl area.

And that was pretty much what happened in July. Then on August 8 the BP refinery in Whiting, Indiana went down. The 413,000 bpd refinery is the world’s largest single customer for tar sands crude and the closure of its largest distillation unit, (at 250,000 bpd) is enough to wipe a few dollars off the price of WCS at the best of times. It was initially thought that the unit would be offline for around two months, but it was restarted last week and will ramp up processing over the coming weeks.

Four days later, an incident on the Enbridge Spearhead Line, which runs from Illinois to Cushing, Oklahoma, connecting to the Gulf Coast, added to the turmoil. For about 24 hours, both the Spearhead and Flanagan lines, which run adjacent to each other totaling nearly 800,000 bpd of capacity, were shut. However, Flanagan, which is the bigger pipe (600,000 bpd) was quickly restarted, while it seems that Spearhead (193,000 bpd) remains shut for now.

The combination of the refinery and pipeline closures sent WCS briefly down to $21.75 below WTI, which would have meant a barrel of WCS was selling for less than $20. This is not fully reflected in Figure 2 as the data is for weekly averages.

Looking ahead it seems the next few months are unlikely to see much of a recovery for the WCS price. The summer driving season in the U.S. ends in the first week of September (Labor Day weekend being the last hurrah), and this signals a period where U.S. refineries begin scheduled maintenance cutting crude runs. Fall and winter is also a period where heavy oil demand weakens a little due to asphalt demand dropping as summer road maintenance programs wind down.

Adding to these seasonal headwinds is an incident at the PBF refinery in Delaware City. An explosion and fire in a fluid catalytic cracker unit last week shut the refinery and PBF plans to move forward planned maintenance and keep the refinery shut for at least a month. This refinery is one of the biggest receivers of tar sands crude by rail.

Finally, as more tar sands crude comes on line from projects that have been under construction for years, primarily Imperial Oil’s Kearl Phase 2 mine and SAGD projects including Husky/BP’s Sunrise SAGD project and Conoco’s Surmont phase 2, the supply of tar sands crude competing for both pipeline space and refining capacity is set to rise over the coming months. These three projects add around 280,000 bpd of production capacity, although actual flows will ramp up slowly over the coming year. Without any accessible new markets, this additional production growth can only serve to keep the WCS price down.