It’s hard to miss news these days about evolving energy technologies, transportation advances and progressing climate policy. To most observers, market demand and policy is encouraging new technologies that will change the way we drive, improve efficiency, and help us switch to cleaner fuels. Logically, this would mean a decrease in demand for oil.

But take a look at Figure 1 below. It is this year’s U.S. oil demand forecast from the Department of Energy’s Energy Information Administration (EIA). 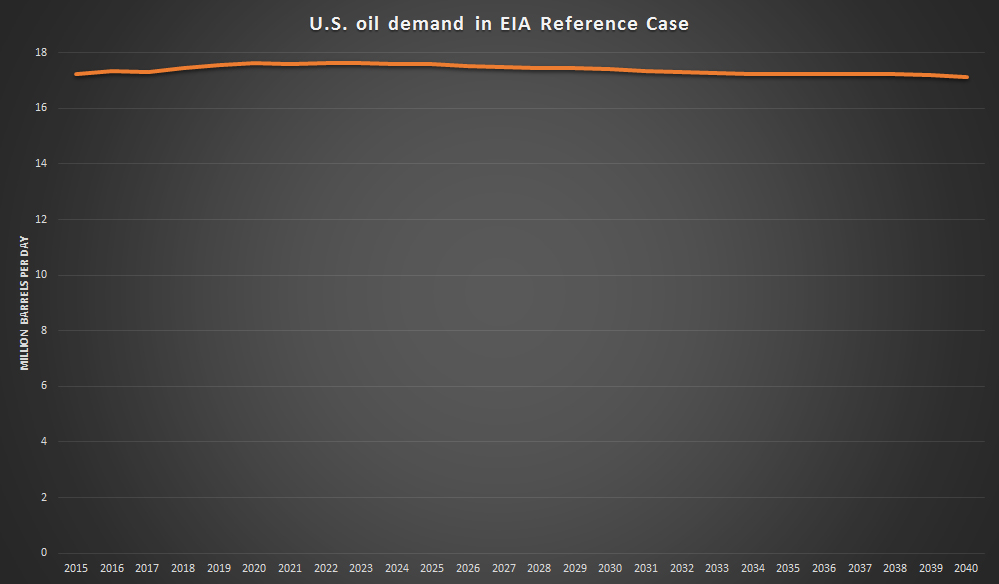 According to the EIA, U.S. oil demand will more or less hold steady for the next two and a half decades. This may come as rather a shock given that the forecast takes into account the impact of fuel efficiency standards (CAFE) including new heavy-duty vehicle standards that are the first in the world.

But the EIA’s long-term energy forecasts are notoriously inaccurate, (as discussed here, here and here) and should not be seen as expert analysis of a likely energy future.

Unfortunately that is exactly how they are used, not only by advocates for drilling, mining and polluting but also by powerful decision makers who should know better. The Federal Government, including the White House, the Department of Energy and the Department of Interior (admittedly taking the White House’s lead) have repeatedly used the EIA’s long term forecast as a basis for granting the oil industry access to drill in America’s riskiest terrain, including the Arctic and Atlantic oceans.

The White House’s key energy policy document cites the EIA’s oil demand forecast, and its outlook for steady oil demand decades into the future, as the basis for the latest round of lease sales in the Outer Continental Shelf, which includes areas in the Atlantic Ocean offered for the first time in decades together with new areas made available north of the Arctic Circle in the Chukchi Sea.

But when it comes to forecasting U.S. oil demand and what will make the country more energy secure in the future, it is not the inaccuracy of the EIA report that is the real issue. After all, no one can really be expected to accurately predict the future. Instead, it is the fact that the Reference Case by definition is a business-as-usual scenario that assumes static energy policies for the next 25 years. In other words, it is a scenario that is based on energy policies that lead us head first into climate catastrophe.

We all know that we need a new energy policy framework to push our national and global economies toward clean energy and greater efficiency in order to prevent the worst impacts of climate change. This is not a vague concept that will need to be implemented at some point in the future but something that is urgently required now. This framework is important not only for the survival of the planet, it will also save trillions of dollars on expensive non-renewable fossil fuels and repairing the damage they cause.

Figure 2 illustrates just how egregious it is to use the EIA’s Reference Case as a basis for energy planning. It compares U.S. energy-related CO2 emissions in the EIA’s forecast with the International Energy Agency’s (IEA) 450 Scenario. This scenario models energy and emissions necessary to maintain a meager 50 percent chance of keeping within the internationally accepted 2 degree Celsius limit for global warming – which the U.S. has agreed to, while many assert it may be too lax to ensure adequate climate safety. As such it is the very least that is required. 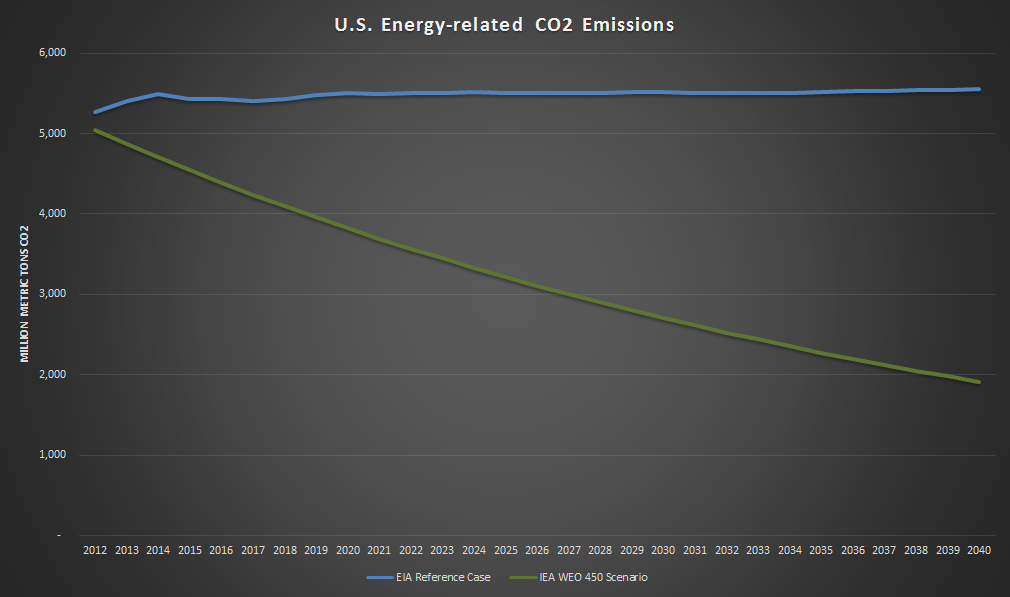 The EIA’s forecast has U.S. emissions more or less static for the next 25 years (sound familiar?) whereas the IEA’s 450 scenario sees U.S. emissions in 2040 cut by over 3.6 billion tons. Therefore, if we were to follow the path of the EIA’s forecast, U.S. emissions would be over 190% greater in 2040 than they should be. Clearly, this is nothing short of climate disaster. In fact a comparison with other IEA scenarios puts the EIA Reference Case in line with at least 5 degrees C of warming, a level of warming that would likely mean disaster for global civilization.(2)

If we’re going to avoid the worst impacts of climate change, impacts that are already costing billions of dollars today, we are going to need to use less oil and produce less oil. In fact, according to the IEA, U.S. oil demand in 2040 will need to be at least 50% less than 2012 levels (see Figure 3). 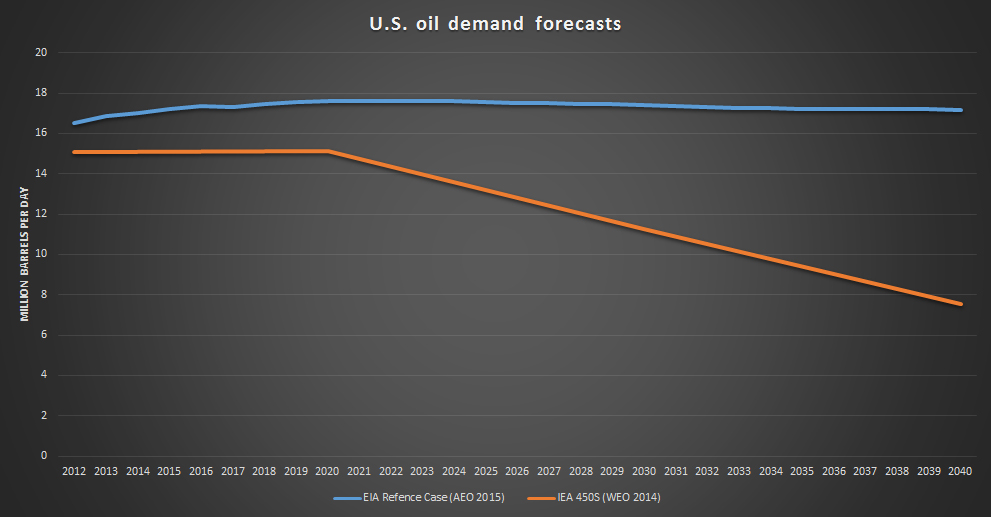 The administration is making great strides in climate policy, especially given the intransigence in Congress. But when it comes to decisions on oil drilling, whether in the Arctic Ocean, Atlantic Ocean or other Federal lands, it is using the wrong basis for decision making. The EIA provides excellent data on past and current energy use. But its forecasts only tell us what we should avoid.

President Obama has set a climate test for the Keystone XL pipeline, suggesting it should not be built if it would significantly impact greenhouse gas emissions. Such a test should be applied not only to that pipeline but to all energy policy, especially U.S. oil drilling.

The starting point for applying such a test should be assessing what America’s energy landscape would look like in a climate ‘safe’ scenario. The EIA is the Administration’s information source on energy. It would serve its role better if it made clear the climate implications of its scenarios and the policies they are based on. Currently, it does no such thing.

As any addiction counselor will tell you, the first step is acknowledging the addiction and setting a course for a better future. Using the EIA Reference Case for planning America’s future oil use denies that a problem exists and sets a course for failure and disaster.