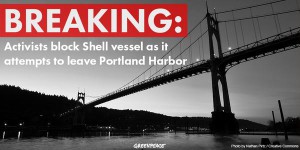 And so the global protests against Shell’s ill-judged Arctic drilling campaign continue.

This morning under the cover of darkness, 26 Greenpeace climbers scaled the St. Johns Bridge in Portland and rappelled over the side.

As I write the climbers are putting their lives on the line for the Arctic. Underneath them a swam of kayakavists are on the water, shouting up words of encouragement. On land, under the bridge a growing number of supports are gathering too.

The climbers are currently preventing Shell’s Arctic ice-breaking ship, the MSV Fennica from passing underneath the bridge on its way to meet the company’s s drilling fleet. The Fennica has been in Portland receiving repairs to a gash it received on its first Shell trip to the Arctic.

The climbers are displaying banners such as “#ShellNo”, “Save the Arctic,” and “President Obama, Last Chance to Say #ShellNo”.

And most worrying for Shell is that the climbers have enough supplies to last for several days. And every day the climbers can prevent Shell from drilling in the Arctic, will further delay the company’s ill-advised Arctic quest for oil.

Annie Leonard, the Executive Director of Greenpeace US, said “Every second we stop Shell counts. The brave climbers here in Portland are now what stand between Shell and Arctic oil. This is President Obama’s last chance to wake up and realize the disaster that could happen on his watch.”

Leonard continued that “there is still time for our President to cancel Shell’s lease to drill in the Arctic, living up to the climate leader we know he can be. Shell has ignored the world’s best scientists, as well as millions of people around the world, who have all said repeatedly that the melting Arctic is a dire warning, not an invitation.”

Greenpeace is now calling on Obama and the US Department of the Interior to rescind Shell’s Arctic drilling leas before it is too late.

It is not clear how long the US authorities will allow the activists to stay. The local US Coast Guard and Police are said to be monitoring the situation.