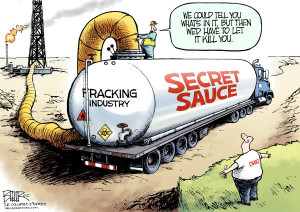 A report by the UK Task Force on Shale Gas has called for greater safety and transparency measures to be implemented before widespread fracking occurs across the country.

The Task Force, which is led by Lord Smith, the former Chairman of the British regulator, the Environment Agency, but which is funded by the shale gas industry, has called for “full disclosure” of all chemicals to be used by the industry, as well as independent monitoring of the fracking process.

Critics of the industry have long called for full disclosure of the chemicals used in the fracking process. Just last month such a demand was made by the CHEM Trust, the leading British charity which researches the harmful effects of chemicals on our environment.

In a damning report the Trust had outlined how although dozens of fracking chemicals are “acutely toxic for humans” or mutagenic, or known or possible carcinogens, many of the chemicals used in the process remain secret. In the US, for example, nearly 300 products used in fracking fluids still contain at least one secret chemical.

The Task Force is now calling for the issue of industry secrecy to be rectified, arguing that “local communities have a right to know what chemicals will be used in industrial activity near to where they live and be reassured that they are being used in safe quantities.”

Whilst the first half of this sentence makes sense, the second half is, I am afraid, fundamentally flawed. If a chemical is carcinogenic – as many fracking chemicals are – then there are no safe limits. There is no “threshold” below which something is safe.

The Task Force also called for baseline and independent monitoring of fracking wells, rather than monitoring by the industry, something that was recommended by the British Royal Society and Royal Academy of Engineering in 2012, and which the government has failed to act on.

Lord Smith said: “We believe it should be independently monitored and inspected. The status quo has no requirement of independent monitoring, it is effectively left up to the companies themselves to report. For public confidence, it is important that it is independent.”

The Task Force did though argue that, it believed that the risk level associated with the public health hazards from fracking are “acceptable provided that the well is properly drilled, protected, monitored and regulated”.

This boils down to the heart of the argument about fracking. On the one hand if there is no leakage either via the well itself or from the layer of rock where the chemicals are poured, then you could argue that this sentence makes sense. But it is easily picked apart.

The Task Force shows a frightening level of ignorance in making such as suggestion. It is right to point out that one of the main areas of the risk of pollution is if the well integrity fails. But that cannot be guaranteed forever, and it could constitute a pollution pathway for hundreds of years or more.

There is also increasing evidence that fracking fluids could, in theory, move great distances underground through fissures and cracks in the geology, moving from fracking strata to drinking water aquifers. It forgets to mention that if pollution does occur underground, there is no way to clean it up. It is permanent and irreversible.

It does nothing to address the fact that you would have to have de facto industrialisation of the British countryside, with the drilling of thousands of fracking well.

And although the Task Force’s next report due out in September addresses climate change, fracking continues our dependence on fossil fuels, just at a time when we need to be disinvesting.

So arguing that fracking is fine as long as it is well regulated, is like saying that the Titantic is safe as long as the deck-chairs are all in nice regulated rows.

No wonder the industry was pleased with the report. Ken Cronin, chief executive of UK Onshore Oil and Gas, which represents the fracking industry, said “I was particularly pleased to note that the Task Force is satisfied that the risk levels associated with public health hazards are acceptable provided that the well is properly drilled, protected, monitored and regulated.”

But the report has been criticised by anti-fracking campaigners. A spokesman from the Frack Free Ryedale campaign group said: “the Task Force on Shale Gas is entirely funded by shale gas companies such as Cuadrilla, Centrica and Total, so all claims of independence should be taken in that context.”