Last month the International Energy Agency (IEA) released a Special Report on climate and energy, to inform governments about what is possible and necessary between now and the climate talks in Paris in December.

Taking a break from its usual advocacy for more investment in fossil fuels (such as here and here), the IEA’s top-line messages were generally positive. The true test of Paris, it said, was “the conviction it conveys that governments are determined to act to the full extent necessary to achieve the goal” of limiting warming to 2°C. Nice words, but what about the detail?

Correctly observing that countries’ emissions pledges (Intended Nationally Determined Contributions, or INDCs) fall short of what is necessary to deliver that goal, the IEA suggested five painless measures to achieve a peak in emissions before 2020. The proposals were unambitious, to say the least: such as stopping only the least efficient coal plants, or phasing out consumer subsidies on fossil fuels only by 2030.

The IEA’s conservatism runs even deeper in its best-known role: forecasting energy supply and demand. Even in its new Bridge Scenario, which it calls on governments to deliver, the IEA forecasts that fossil fuels would still account for 73% of world energy use in 2030 (compared to 81% now), and renewables just 5% (excluding hydro and bioenergy). (See Figures 1 and 2.) 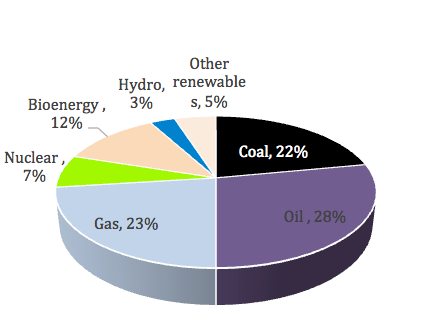 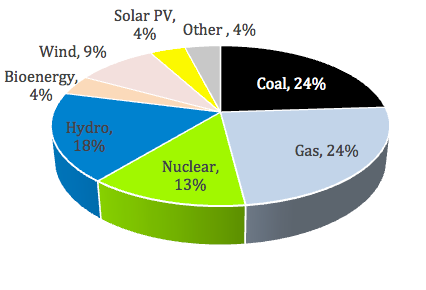 In reality, energy usage is changing much faster than that, and governments are now lagging the curve on climate action rather than leading it. The real drivers today are clean energy producers and consumers, and increasingly people-powered activism.

The IEA, along with oil companies such as ExxonMobil and BP, is promoting fossil fuel fatalism: the view that although they are concerned about climate change, the pragmatic reality is that fossil fuels will dominate our energy system well beyond the middle of the 21st Century. Psychologically, it is another form of denial.

That is the future the fossil fuel industry would like to see, and would like us to think is inevitable. And this is where we face a significant challenge. Why do the industry, and agencies locked into the status quo, have so much credibility when it comes to defining our energy future? In their world, energy = fossil fuels, but in the real world, this is rapidly shifting.

Consider the past few years as renewable energy sources have moved from the margins to the mainstream. Growth rates have been exceeding everyone’s expectations, largely because the likes of the IEA have been underestimating them for years despite the obvious market trends and signals.

The only way that the IEA can sustain its fossil-friendly projections is by predicating an immediate drop in the growth rate of renewables. This is downright illogical as renewable costs plunge, incentivizing policies kick-in, and demand growth for fossil fuels begins to slow. Last year for example, global emissions did not rise for the first time ever outside economic recessions, while China’s coal consumption remained flat.

Figure 3[1] shows the IEA’s near-term growth forecasts for electricity generation by wind and solar, compared to the most recent actual growth data it had when making the forecasts. Data are shown from the new Special Report and from the last four issues of the flagship World Energy Outlook. Every year, the IEA has predicted a dramatic slowdown in wind and solar growth; every year it has been wrong. 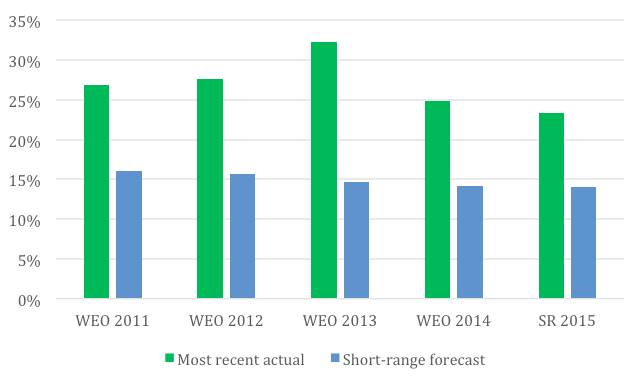 After the immediate slowdown, the IEA forecasts further deceleration into the future. Figure 4 shows its projections for growth rates of wind and solar generation out to 2030. 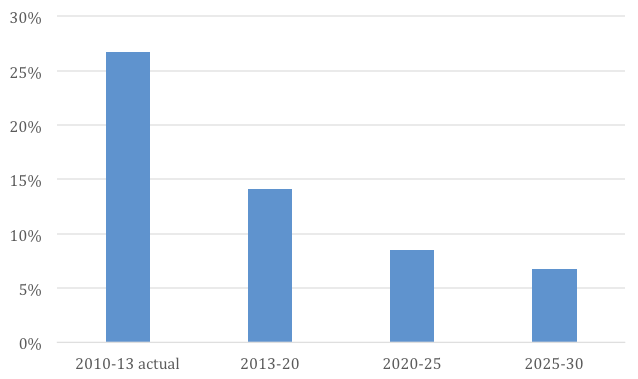 Since growth rates are compounded, this makes a big difference to the future. If annual growth rates of 25% were sustained, wind and solar would overtake coal as soon as 2024. Nor is this a far-fetched idea: a recent survey of 1,600 energy experts worldwide showed that half of the respondents believed that with policy action, renewables could account for 70% of generation by 2030.

Clearly, exponential growth cannot continue forever; at some point markets would get saturated. But is a big slowdown likely to happen at precisely the moment when renewables are becoming cheaper than fossil fuels? Deutsche Bank has predicted that solar systems will be at grid parity in 80% of the world market within two years. And costs continue to fall.

Even on the actions of governments, the IEA tends to ‘round down’. For instance:

Remember, this scenario was supposed to be the IEA’s suggestion for how governments could go further than their existing commitments!

The IEA projects itself as an impartial center of expertise, which makes it particularly influential in spreading fossil fuel fatalism. Yet a look at the trends in clean energy suggests very different possible futures. To tackle climate change, one step must be to liberate our imaginations from the grip of this fatalism.