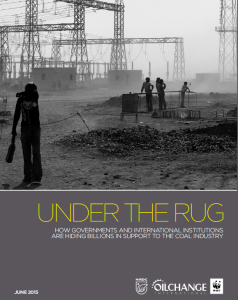 Over the last eight years, as the scope of the climate crisis has deepened, nations of the world and particularly of the G20 and G7, have made repeated clear commitments to both fight climate change and end fossil fuel subsidies. Virtually all nations have made commitments to limit global temperature rise to 2°C (3.6°F).

And yet, billions of dollars’ worth of government support continues to flow towards fossil fuels and, incredibly, towards coal. This government financing for coal — largely in the form of export support, but also as development aid and general finance — is perpetuating coal use and exacerbating climate change. It needs to stop, immediately.

The full extent of government financing for coal overseas is not common knowledge, and is revealed in this report for the first time. A very large amount of public financing has been flowing to coal projects around the world. Our analysis finds that public finance has played a significant role in supporting coal projects over the last 8 years. Between 2007 and 2014, more than US $73 billion — or over $9 billion a year — in public finance was approved for coal.

This funding is being provided by a handful of countries that continue to resist pressure to end this public financing. Japan provided the largest amount of coal financing of any country, with over $20 billion of finance from 2007 to 2014. In the OECD, Korea and Germany were the next largest sources of funding for coal. Japan, Korea and Australia are leading the opposition to limits on coal finance in international discussions.

Combining all known public sources, and augmenting them with subscription industry databases, this report makes comprehensive information on public financing for coal easily accessible for the first time. This resource will be updated on an ongoing basis and will be made available online at: www.ShiftTheSubsidies.org/coal.

RECOMMENDATIONS
To address climate change and improve transparency, governments should: