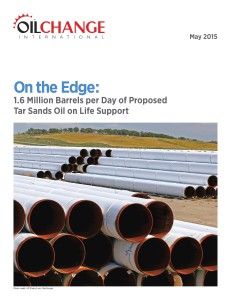 The Canadian tar sands is among the most carbon-intensive, highest-cost sources of oil in the world. Even prior to the precipitous drop in global oil prices late last year, three major projects were cancelled in the sector with companies unable to chart a profitable path forward.

Since the collapse in global oil prices, the sector has been under pressure to make further cuts, leading to substantial budget cuts, job losses, and a much more bearish outlook on expansion projections in the coming years.

In the wake of plummeting oil prices and ongoing market access constraints, the tar sands sector has placed on hold dozens of planned projects.