On 5th March, activists and community members came together in Quito for the annual Día del Yasuní. Oil Change International was invited to comment on trends in international oil, and what they mean for the campaign to keep the oil in the ground. 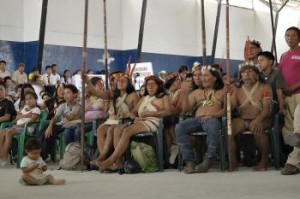 “I think oil has brought us more bad than good,” said Ecuador’s President Rafael Correa in 2007. “We need to do something about it.”

He was speaking shortly after announcing the Yasuní-ITT initiative, in which he proposed Ecuador would refrain from development of the ITT oilfield in the Yasuní National Park, one of the most biodiverse places in the world, in return for international compensation for lost revenues. Correa abandoned the initiative in 2013 after failing to attract sufficient funding. PetroAmazonas is set to soon begin work on developing the field.

The “something” Correa has done about oil has been largely to assert greater national control over production, and a greater national share of revenues. Most contracts with foreign companies – which he described as “a true entrapment for the country” – have been renegotiated.

These are significant achievements, but they address only one aspect of the oil problem.

Oil development continues to power ahead, albeit much of it in the hands of Ecuadorian state-owned companies. The ecological and social impacts in the Amazon have been little better than the devastation caused by Texaco between 1964 and 1992, for which the company (now Chevron) continues to dodge compensation payments.

Ecuador remains dependent on oil for around 40% of government revenues. In November it joined Venezuela, and indeed all OPEC members except the Gulf monarchies, in calling for a cut to the group’s oil production, in order to prevent further falls in oil price. However those monarchies – led by Saudi Arabia – won the argument, and prices continued to fall to below half their level of June 2014.

So far, the consequent cuts to Ecuador’s budget have been limited by a Faustian bargain with China, which agreed to provide further loans in return for the pledging of future oil volumes. Around 90% of Ecuador’s exports are now committed to China. Chinese companies have also played an increasing role in developing the fields, and their participation may be sought to help finance the ITT development. In the long term, this is not a winning strategy for Ecuador, which becomes simultaneously both more indebted and more dependent on volatile oil revenues.

So where does Ecuador sit in the world of oil? And how can it reclaim international leadership in addressing both climate change and the immediate costs of oil?

In 1952, the US Senate published a damning report entitled ‘The International Petroleum Cartel’. Most people hearing that phrase today would think first of OPEC, but in fact the Senate was talking about the corporations that then controlled the oil market: Exxon, Shell, BP, Mobil, Chevron, Texaco and Gulf. Those companies, known as the Seven Sisters, ran almost all of the world’s oil production, mostly under long-lasting, one-sided contracts that were relics of the colonial era.

As countries gained independence, the movement for resource sovereignty became the central plank of North-South relations. Southern countries rightly wanted to control their own resources, and to receive the economic benefits from them.

In this context, OPEC can be seen as a champion of the Global South. Following its foundation in 1960, it helped its members successfully reclaim control over their oil. OPEC was a coordinating hub, which enabled the members to act in concert rather than being isolated by the oil corporations, progressively increasing their shares of revenues until eventually nationalising their oil industries during the 1970s.

The struggles between Northern corporations and Southern nations continue, not just in Ecuador. The most visible recent manifestation was the war in Iraq, and the subsequent US and British efforts during the occupation to return control of its huge oil reserves to corporations. Iraqi civil society succeeded in stopping the USA from passing an oil privatisation law, but the victory was partial as oil corporations managed to regain a foothold in Iraq, albeit with less power and lower profits than they had originally intended.

However, But resource sovereignty at a purely national level is no longer enough. What of the sovereignty of local communities over the land on which they depend? Development debates have increasingly recognised that major projects should be subject to communities’ free, prior informed consent.

Conversely, what of the sovereignty of people elsewhere over their atmosphere and weather? Climate change internationalises the resource dimension of fossil fuels beyond the geological location of reserves. As Southern countries generally stand to be hit hardest by climate change, and have the least resources to adapt, climate too becomes an issue of global justice.

A new conception of sovereignty is needed for the circumstances of the 21st Century – and oil exporting countries now risk being on the wrong side of it.

The starting point is simple: to limit climate change, the world must stop extracting and burning fossil fuels.

For a reasonable (4 out of 5) chance of keeping warming below the internationally-agreed target of 2°C, scientists warn that less than 886 gigatonnes (GT) of carbon dioxide (CO2) may be burned in the first half of the 21st century. (2°C is already a dangerous level of climate change – governments of the most vulnerable countries call for a 1.5°C target, as do OPEC members Ecuador and Venezuela).

Subtracting emissions from the first decade of the century leaves a carbon budget of 565 GT from 2010 to 2049. If burned, the world’s known fossil fuel reserves would release 2,795 GT of CO2. In other words, 80% of these reserves must be left in the ground to keep warming below 2°C, or more for 1.5°C.

Many Southern movements have long demanded that some oil reserves must be left in the ground. But the idea – obvious to many – has started to penetrate some elite discussions, including in the home capitals of fossil fuel companies.

Faced with the logic of carbon budgets, increasingly popularised by the climate movement and accepted by some investors and financial regulators, oil majors like BP (pp.19, 85) and Shell have had to admit that trends in fossil fuels will lead the world to climate catastrophe, having previously claimed (disingenuously) to be part of the solution.

However, the clear identification of those corporations as culprits does not let oil-exporting Southern countries off the hook. While few would deny that the greatest responsibility for action lies with the historic polluters, the small amount left in carbon budgets means that Northern action alone will not be sufficient. OPEC’s reserves of oil, for instance (72% of the world total), well exceed the available carbon budget, even if BP et al stopped producing tomorrow.

How should carbon budgets be divided between different countries and companies? Several criteria have been proposed for which reserves should stay in the ground: the most expensive (such as the extreme oil in the arctic or ultra-deepwater), the most carbon intensive (coal and tar sands), or the most recently discovered or developed.

There are clearly arguments too that the most damaging to extract (such as ITT in Yasuní) should be left in the ground. So far the OPEC secretariat and many of its members – especially Saudi Arabia – have not engaged in these debates, but have instead sought to slow down international action on climate change – or to divert the issue entirely to industrialised countries.

Vulnerable countries might reasonably question whether it remains appropriate for OPEC members to play a leading role in the G77 bloc if they do not accept the need to keep 80% of the world’s fossil fuels in the ground, and engage in serious debate as to which 80% those will be.

A new role for OPEC?

The collapse of oil prices since June 2014 has prompted a new round of obituaries for OPEC (such as here, here and here). But the organisation has been repeatedly pronounced dead throughout the organisation’s 55-year history.

In reality, OPEC’s market power has always been constrained by the fact that it controls less than half of the world’s oil production (in spite of having the majority of the reserves). If it holds back its production in order to boost the oil price, that enables multinational companies to profitably develop more costly oilfields. Over time, if the price remains high, OPEC members lose market share to those companies.

This happened in the 1980s, when high prices made possible the development of costly oil provinces such as the North Sea and Alaska. OPEC kept cutting, in order to shore up the price, but by 1985, its market share had fallen to 28%, from around 50% in 1973. Recognising they were fighting a losing battle, Saudi Arabia and OPEC switched strategy, and increased their production, crashing the price.

The same is happening now. Prices above $100 a barrel over recent years enabled development of expensive oilfields, especially tight oil, fracked from shale in the USA. In November’s OPEC meeting, rather than cutting their own production and allowing tight oil to grow even more, OPEC members decided to maintain their production levels, and the price continued downward.

While these factors constrain OPEC’s ability to act as a price fixer, the organisation may have a more important role in helping its members go through profound transition. In fact, its greatest achievement was helping facilitate the nationalisations of most of its members’ oil industries during the 1970s.

Oil producers today face a challenge at least as large as their earlier exploitation by multinationals: how to adapt their economies in a carbon-constrained world. The failure of the Yasuní-ITT initiative raised a question for Ecuador of how to address climate change without sacrificing economic development.

The Ecuador government should insist both that OPEC take climate change more seriously, and that it help its members in the necessary transition.

If the price collapse holds one abiding lesson for governments, it is that dependence on oil exports is not economically sustainable.

Looking longer, it is clear that over the coming years and decades, fossil fuels will lose their value. As policy worldwide shifts to address climate change, the development of clean energy technologies is accelerating. Some analysts suggest that electric vehicles, charged with renewable power, could be as cheap as oil-fuelled vehicles as soon as 2020.

It would be doubly short-sighted to destroy natural and social capital – as oil development always does – for the sake of short-term revenues. Ecuador and other oil producing countries should look to the future, and position themselves for success in the 21st century, rather than remaining wedded to the fuels of the past.