This past Saturday, it happened again. A train carrying highly volatile crude oil, in this case tar sands crude from Alberta, derailed in Ontario and caught fire, damaging a bridge in the blaze. This is the fourth time in as many weeks an oil train has derailed and caught fire or exploded.

That’s right, there have been FOUR oil train derailments in North America over the past month. Here’s what that looks like: 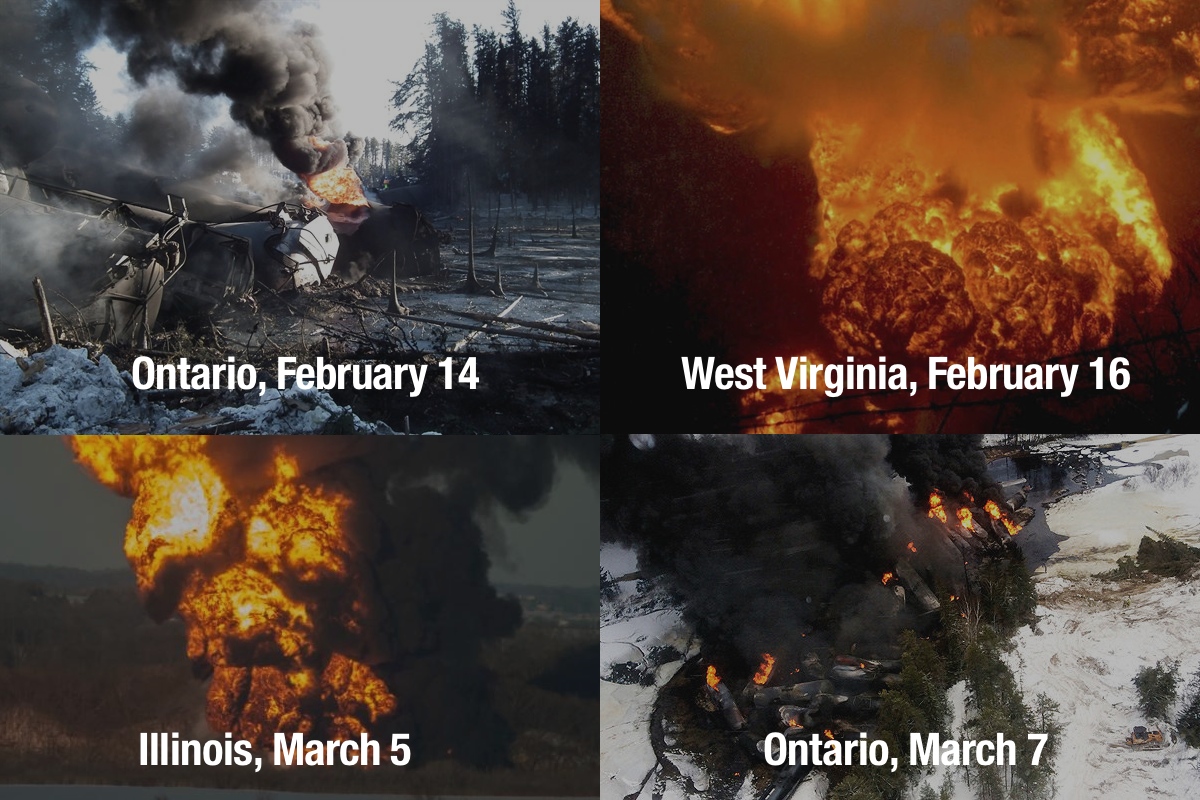 There’s clear outrage at the local level, but, so far, political action in Washington has been nearly nonexistent. Worse, some recent reports suggest the Obama administration ‘balked’ at dealing with the problem when considering it last year.

The White House is the responsible party here and it’s time this issue be given the level of attention it deserves by President Obama. It has been 20 months since the tragedy in Lac-Mégantic, but the President seems content pushing paper around while meeting with industry representatives.

As recently as last week dozens of industry representatives met with White House officials downplaying the need for strict safety regulations while an oil train in Illinois was still burning.

As it stands, draft safety standards put forth by the Pipeline and Hazardous Materials Safety Administration (PHMSA), a part of the Department of Transportation, are awaiting final approval by the Obama Administration.

These new rules are a potentially important step, but the recent accidents make it clear even upgraded safety won’t be enough. All four accidents happened with “safer” oil tank cars, not the DOT-111 tankers widely known to be dangerous — and there are no reports any of the trains were going above the speed limit.

President Obama should adopt the strictest possible safety standards, but, at the end of the day, the only safe place for this oil is in the ground — we simply can’t afford to burn it for climate reasons and there’s no good way to transport it.

These Were No Minor Accidents

Let’s take a look at the recent derailments and why this past month demands more of a public response from Washington than it has received thus far:

It is clear from this most recent spate of accidents that neither “safer” tank cars or the current speed limits are limiting the threat crude-by-rail poses to our communities. But that wasn’t the only lesson to be taken from these derailments. The other, just as significant, is that transporting tar sands isn’t necessarily safer than transporting Bakken crude — which we explain in detail in our recent blog post.

Up until now it had been widely believed that tar sands crude wasn’t as explosive or combustible as the oil coming from the Bakken region in North Dakota. The recent accidents have blown this assumption to pieces.

If the oil industry gets its way, accidents like these will become the new normal. The Department of Transportation itself has found that crude oil trains are likely to derail an average of 10 times a year over the next two decades — and that’s a conservative estimate made with old data. This would cause more than $4 billion in damage and possibly kill HUNDREDS.

This is a government agency saying hundreds of people might die in fiery explosions because of the greed of a few private corporations, yet there has been little action taken to slow or stop the oil industry’s efforts.

While exploding oil trains are a frightening proposition, none of this should suggest pipelines are any better. Choosing between one or the other, as many oil insiders have suggested is necessary, is like choosing to get hit by a bus or a truck.

What’s needed is an urgent and rapid transition to renewable energy that doesn’t devastate the landscape, trample on indigenous and community rights, or cook the planet. Put simply: we need to keep the oil in the ground.

That’s the message President Obama needs to hear. While he considers the best course of action on the proposed PHMSA rules, it’s important for him to know that communities all over the country are rising up and taking a stand.

In some places they’re already winning, blocking oil terminals and getting in the way of proposed expansions.

Near Seattle, local organizers won a victory over Shell, which wants to build an oil train terminal to supply its Anacortes refinery. Shell’s plans now require a full-blown environmental review. And in California, communities are standing in the way of terminal expansions across the state.

Our message is simple. If transporting oil can’t be done safely, don’t do it. Keep it in the ground. It’s time for President Obama to take this issue seriously and put in place a moratorium on all crude-by-rail shipments until community and climate safety can be guaranteed.

Derailments like the four over the past month are what an “All of the Above” energy strategy looks like and we’re not going to take it.

Update: While writing this article, another oil train derailed in Manitoba. Information is still coming out about this latest accident, though it appears to be smaller in scale. Still, that makes FIVE derailments involving trains carrying crude oil or refined oil products in under a month.

Take Action: Send your message to President Obama calling for a moratorium on crude-by-rail until safety is guaranteed.