While the steep decline in oil prices since June has been well documented, perhaps less noticeable have been the changes in the spread – or price differential – between Brent (an international oil price benchmark) and WTI (a major North American benchmark). As the oil price decline took hold, the previously wide Brent-WTI spread shrank to a negligible level, but as prices bottomed out in late January the price differential has reemerged, standing most recently at around $10 per barrel. The widening spread between Brent and WTI is a sign of continued strong North American production growth, which as a whole is likely to take at least several more months to respond to declining prices. 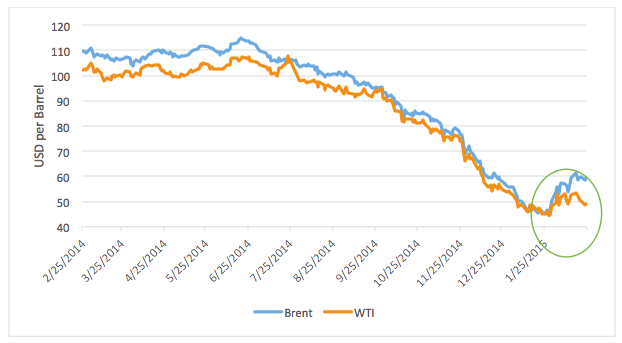 The renewed spread is supportive of crude-by-rail from North Dakota. Due to the high costs of crude-by-rail transport, shippers are incentivized by the differential to ship to coastal markets where refineries will pay prices closer to Brent. As the Gulf Coast market is currently saturated with crude, shippers  do better sending their crude to the east and west coasts, including refineries in eastern Canada, to get higher prices.