The falling oil price is bound to have an impact on the most expensive forms of oil production and the tar sands is high up on the list of costly, capital-intensive sources of crude. But as the industry struggles to remain viable in a new oil price environment, each company is determined to convince its investors that it has the winning strategy to survive.

The International Energy Agency (IEA) weighed in on the issue a few weeks ago in its annual Medium Term Oil Market Report (MTOMR), which analyses the oil market for the forthcoming five-year period. The IEA reduced its earlier prediction for Canadian oil production in 2020 by some 435,000 bpd due to lower oil price expectations for the period.

However, the IEA then went on to present figures for future investment in tar sands that do not appear to have a factual basis. The IEA cited the Rystad Energy UCube database as the source for this data. Oil Change International also has access to this database of the global upstream oil and gas industry, and we checked the IEA’s numbers. The IEA stated that investment in tar sands projects will be US$37 billion before climbing to $88 billion by 2020. This is, in fact, fundamentally different than the Rystad data. 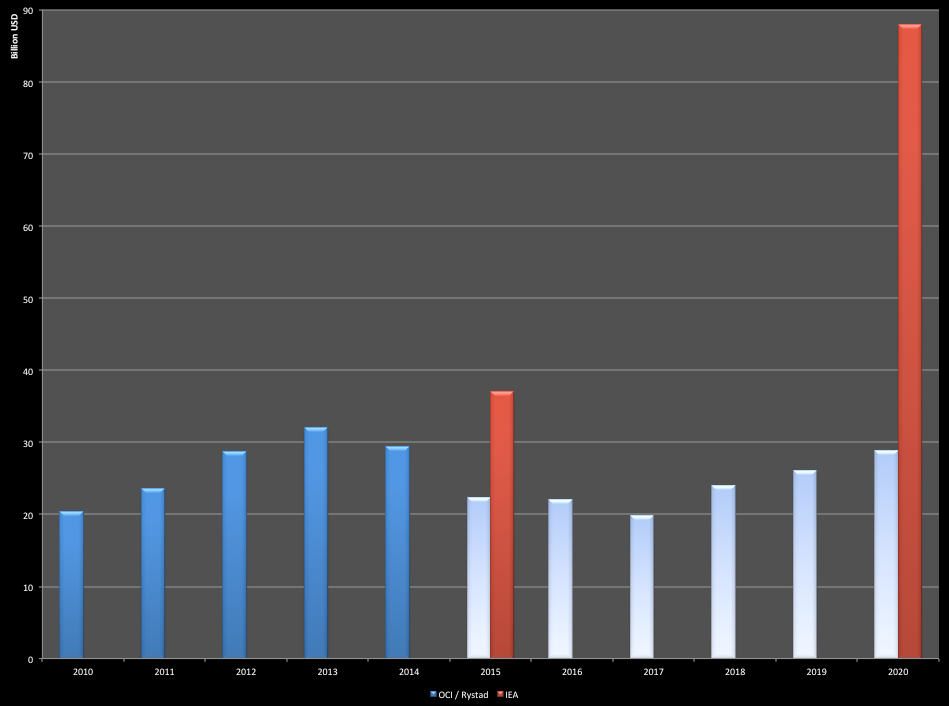 These estimates are vastly different than what the IEA presented as Rystad data. In addition, their assumed post 2020 recovery  rests on assumptions of significant oil price recovery and on some resolution of transportation constraints facing the tar sands industry as a result of ongoing delays to pipeline infrastructure, in particular the Keystone XL and Northern Gateway pipelines.

Rystad Energy has confirmed to us that our use of their data is correct. We hope the staff at the IEA also checks with Rystad and corrects their mistake. In the coming months we will be further building a case for why a recovery in tar sands investment may be optimistic.

Note: Oil Change International attempted to contact IEA for comment, but they have not yet replied. IEA was unclear in their wording about what year they projected tar sands capex to be $37 billion,and we have interpreted their data as 2015. They may have meant 2017, but since the scale of that error would be even larger, we have given them the benefit of the doubt.