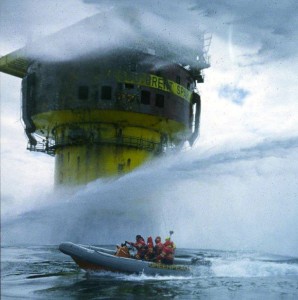 the oil giant Shell was embroiled in two separate controversies, which still haunt the company to this day.

Shell was coming under intense pressure to intervene in the case of the Nigerian playwright and activist Ken Saro-Wiwa, who had been imprisoned by the corrupt military junta on trumped up murder charges.

The real reason Saro-Wiwa had been arrested was to silence the Ogoni campaign against Shell in the Niger Delta, where the oil company was accused of endemic pollution, double standards and indifference to the plight of the local people.

Shell stayed silent and Saro-Wiwa was hung by the military in November 1995. The company will face renewed scrutiny of its operations in Nigeria as the 20th Anniversary of Saro-Wiwa’s death approaches in November this year.

The second controversy to hit was far closer to home. In the spring and summer of that year, Shell was at the centre of a row over the disposal of a redundent oil storage platform in the North Sea.

A campaign by Greenpeace against the oil giant’s decision to decommission and dispose of the Brent Spar platform into the North Sea slowly began to make news.

When Greenpeace activists occupied the redundant platform, the story became international headlines, plunging the oil giant into a full blown crisis. Greenpeace’s demands were simple: Shell should clean up its mess and not be allowed to dump the Brent Spar in the sea, but tow it to land and recycle it instead.

As the international pressure grew and Shell gas stations were boycotted in key countries like Germany, eventually the oil company buckled and reversed its decision to dump the Brent Spar. Greenpeace won and Shell was forced into a humiliating U-turn.

The humiliation and hurt of that decision would scar Shell executives for years to come. The company spent tens of millions re-branding the business. It started publishing glossy brochures such as “Profits and Principles – Does there have to be a Choice?” which were designed to force a debate on the ethics of the oil industry and business in general. Shell tried to spin the debate to argue that you could be an oil company and a good corporate citizen at the same time.

Twenty years on, that debate is now well trodden and the oil industry have become experts at greenwashing whilst repeatedly failing to show any kind of responsibility or leadership on issues such as climate change. Instead of pioneering an energy revolution into renewables, the industry has instead obfuscated the evidence on climate change, with companies such as Exxon pouring tens of millions into a vast network of think tanks and front groups to confuse the public over the science and urgency on action.

Shell has played a more nuanced game than Exxon on climate in the last few years, but is still ploughing ahead with highly controversial projects in the Arctic and the tar sands. It is these very areas we should be disinvesting from oil first, but Shell is investing heavilly. Belligerently the oil company is putting profits before principles here,  despite the spin and hype of its glossy publications telling you otherwise.

So back to the North Sea. Today the oil giant will begin the process of dismantling the Brent oil field, once the great powerhouse of the North Sea. During its prime, the Brent field produced over half a million barrels a day, more than half Britain’s current total output.

In total, the field which lies north east of the Shetland Islands, has produced about 10% of all UK North Sea oil and gas since production began in the mid-seventies. The field was so important it gave its name to one of the international crude benchmarks: brent crude.

But the glory days are long gone. So today, Shell is beginning a consultation on removing the top of the vast 23,500 tonne Brent Delta platform, one of four platforms in the Brent field.

However there is no doubt that the ghost of Brent Spar will hang heavy over the 30-day consultation period.  Shell is desperate to avoid the humiliation of the Brent Spar fiasco.

Currently the plan is to transport the main platform back to shore to be recycled, although there is uncertainty over the fate of the rest of the structure. The main platform will be transported via the world’s largest crane vessel, the Pieter Schelte, to Teeside where it will be scrapped and recycled into washing machine parts.

But this still leaves four vast concrete legs as well as contaminated concrete oil storage tanks sitting on the sea bed which will remain. Shell might try and leave some of these structures in place, although this is opposed by Greenpeace and other environmental groups who are watching the process intently.

Dr. David Santillo from Greenpeace International’s Science Unit has warned Shell that they must also decommission the Delta’s concrete legs and underwater storage tanks. “Shell should take full responsibility for the waste they have generated and not leave anything on the seabed that is possible for them to recover,” he told the Financial Times.

WWF Scotland director Lang Banks has similar concerns: “Having made massive profits over the last few decades, it’s only right that Shell should push those limits once again to clean up their potentially hazardous legacy and protect the marine environment.”

Banks adds that Scotland could lead a new multi-billion pound, global decommissioning industry. And there is certainly money to be made. Over the next 30 years, some 470 platforms, as well as 10,000km of pipelines and 5,000 wells, will have to be decommissioned from the North Sea alone.

So as Shell’s public consultation begins so too does another debate over profits versus principles, as the oil industry will look for simple cost-effective solutions, which will leave some structures in place or even sunk at sea, whereas its critics will demand total removal of structures, which will of course cost more.