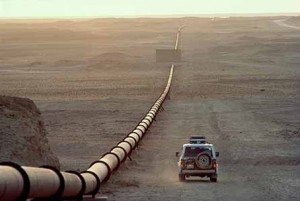 The death yesterday of King Abdullah of Saudi Arabia prompted renewed speculation about the future of the oil policy he oversaw in his last months. The Saudi-driven OPEC decision in November not to cut its oil production helped push oil prices down to below $50, less than half their level of last June.

The post-mortem uptick in the oil price proved short-lived as the new King Salman quickly adopted stability and continuity as his watchwords. He confirmed his half-brother Muqrin as Crown Prince, and most commentators predicted a continuation of the oil policy.

Salman’s desire to project stability rests not only on the 79-year-old new king’s own ill health. If and when Muqrin succeeds him, he will be the last of the sons of King Abdulaziz, the founder of Saudi Arabia. And whereas the throne has passed fairly smoothly along the line of brothers and half-brothers since Abdulaziz’ death in 1953, the jump to the next generation was much more disputed.

For that reason, Salman quickly named his half-nephew Mohammed bin Nayef as second in line, set to be the first of Abdulaziz’ grandsons to become king. They will be hoping other factions of the royal family accept that nomination.

(See this handy graphic from Reuters to explain the succession)

Oil Minister al-Naimi – who turns 80 this year – has been saying for some time he wants to retire, and Abdullah reportedly persuaded him to stay until the end of his reign. He continues in post for now, with some Saudi-watchers suggesting he will stay till the June OPEC meeting. The low-price policy could thus be expected to continue for now, with renewed speculation in a few months’ time.

The dangers of instability could still threaten the current Saudi oil course. The echoes of the Arab Spring continue to spook the royal family – and a higher oil price would help them use greater oil revenues to buy popular consent.

Secondly, most of OPEC – aside from Saudi allies Kuwait and the UAE – is struggling under the low price. Although Saudi Arabia holds the cards in OPEC, it needs the organisation to cloak its unilateral power in collective action. A more insecure Saudi leadership may feel less willing to assert itself against fellow OPEC members.

The reason for the Saudi oil policy is that the government recognised it was in a Catch 22. Each time it cut production, the resulting higher oil price would help private companies extract more extreme oil, forcing Saudi Arabia to cut again to maintain the price.

Like it did in the 1980s, Saudi Arabia would end up with an ever decreasing market share. Let the high-cost producers cut their production instead, went the Saudi reasoning, by making them uneconomic. The oil price might settle at a lower level, but it would break out of the Catch 22.

Certainly, the cause of a stable climate is helped by keeping some of that extreme oil in the ground. But on its own that won’t be enough. The International Energy Agency warned in 2012 that  only one third of known fossil fuel reserves can be burned before 2050 if we are to have a 50-50 chance of keeping global warming below 2°C.

By whatever formula that unburnable carbon is shared between coal, oil and gas, not all of the known conventional oil reserves can be burned, let alone the unconventional sources like tar sands and fracked oil.

OPEC possesses over 70% of the world’s oil reserves – nearly half of that in just Saudi Arabia and Venezuela. If Saudi Arabia really wants to ensure that its own (or OPEC’s) oil is what gets counted within carbon budgets, it might want to support a global deal on climate. A cap on world oil demand would make those expensive sources of oil simply not worth developing – and focus the budget on the easy, cheap oil the world already has.

Saudi Arabia relinquishing the role of swing producer is a new development. Saudi Arabia preferring lower oil prices than its fellow OPEC members is not.

One explanation of the traditional Saudi preference for low prices is that a low price would slow down competition from alternatives to oil.

Compared to the oil price spike of the 1970s, oil has a very small role in power generation, so competes less with clean energy sources like wind and solar. Oil is mainly used in transportation, and the main challenge there comes from electric vehicles (EVs).

In August, investment bank UBS published research on the advances in battery technology that suggested it won’t be long before EVs could outprice oil-fuelled cars even when the oil price is down at $50.

For Saudi Arabia, the death of Abdullah means one step closer to the handover to the next generation. If the choice of Mohammed bin Nayef is contested, internal instability could push Saudi Arabia to switch to promoting high prices in order to spend its way out of trouble – and that could also ease relations in OPEC. If the regime recognises that oil’s days are numbered, that too might push it to maximise its revenue from the last decades of oil.

If on the other hand it chooses to keep maximising its share of the oil market (at the cost of lower prices), that approach would be bolstered by international action on climate change. While Saudi Arabia may be unlikely to go there just yet, the coming years might provoke some interesting debates about the kingdom’s position in the international community.