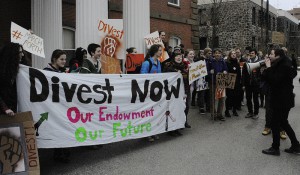 If you had Googled “fossil fuels” and “stranded assets” a few years ago, you would have probably got no hits. But how times change.

If the Financial Times is a weathervane of how seriously an issue is being taken by the financial community, then two-thirds of a page in today’s paper discussing how investors are “turning up the heat on fossil fuels”, is a reflection of an idea whose time has come.

Yesterday, in her crystal ball gazing for the year ahead, Hannah McKinnon, blogged on these pages that: “The concepts of stranded assets and unburnable carbon gained even more traction over the past year, with the Governor of the Bank of England saying in no uncertain terms that the majority of fossil fuel reserves are unburnable.”

And so it will this year, with more and more investors pushing for fossil fuel disinvestment.

The FT explores the so-called “rift” between those in the ethical investment camp who argue it is best to divest from fossil fuels outright and those who believe it is better to use their investments as tools for engagement with oil companies and use their financial muscle as leverage for action.

Whilst it is encouraging that the fossil fuel disinvestment debate is gathering pace, it is amazing how many institutions still invest in fossil fuels, given the overwhelming evidence on climate change.

The Guardian newspaper reports today how an analysis of loans made by the UK’s export credit agency has revealed how the British government has provided some £1.7 billion in loans to fossil fuel projects across the glove. This is despite a pledge to withdraw financial support from such schemes.

Just over a week ago, I had an article published in the British press looking at the pension investments of the British regulator, the Environment Agency (EA), which include companies investing in fossil fuels and fracking.

The pension details were contained in a response to a Freedom of Information request from the EA, and revealed that the regulator held £50 million in direct investments in oil and gas companies such as Shell, BP and BG Group, as well as millions more in indirect oil and gas funds.

Apart from raising the issue of a blatant conflict of interest for the EA as it is investing in companies is it is regulating, the article also explored the concept of fossil fuel disinvestment.

Last year the EA commissioned a report on the risk to its fossil fuel investments becoming “stranded assets” but was advised against disinvesting.

Controversially, its consultants concluded that “Divestment from the fossil industry is neither an industry-leading nor progressive strategy.” They went on to argue that “Reducing investment exposure to the fossil industry does not precipitate a reduced prevalence of that industry”.

This view is clearly contradicted by Bill McKibben from 350.org in the Financial Times today: “The idea that anyone else is going to merrily persuade Chevron or BP that they want to be in the renewables business or something is nuts”, he says.

Judging by the recent successes of the disinvestment campaign, many people agree with him. The concept of stranded assets is an idea which will only grow.