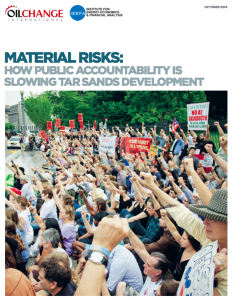 A new report by the Institute for Energy Economics and Financial Analysis (IEEFA) and Oil Change International quantifies for the first time the financial and carbon impact of public opposition to pipelines and other expanded investment in tar sands production.

The report, “Material Risks: How Public Accountability Is Slowing Tar Sands Development,” presents market analysis and industry data to support its estimates on lost sales revenue to the tar sands industry as public opposition creates delays and project cancellations. The report also describes other market forces that are putting tar sand developers at a growing disadvantage.

A significant segment of opposition, the report notes, is from First Nations in Canada who are raising sovereignty claims and other environmental challenges.

Among the report’s findings:

Analysts have recently downgraded their outlook for tar sands production.

The Institute for Energy Economics and Financial Analysis (IEEFA), based in Cleveland, Ohio, conducts research and analyses on financial and economic issues related to energy and the environment. The Institute’s mission is to accelerate the transition to a diverse, sustainable and profitable energy economy and to reduce dependence on coal and other non-renewable energy resources. For more information, visit www.ieefa.org.

Oil Change International is a research, communications, and advocacy organization focused on exposing the true costs of fossil fuels and facilitating the coming transition towards clean energy. Oil Change works to achieve its mission by producing strategic research and hard-hitting investigations; engaging in domestic and international policy and media spaces; and providing leadership in organizing resistance to the political influence of the fossil fuel industry. For more information, visit priceofoil.org.