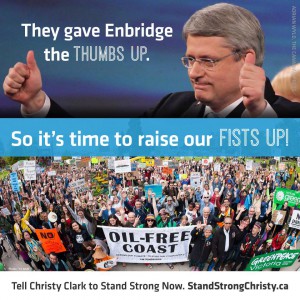 And so the battle lines have been drawn.

On the one hand you have Canada’s federal government, ever eager to please Big Oil, which has just agreed to let Enbridge build its highly controversial $8 billion Northern Gateway pipeline from the toxic tar sands of Alberta to the rugged, beautiful coast of British Colombia.

And on the other you have the national opposition political parties, the NDP and Liberals, the provincial government of British Colombia, Canada’s First Nations as well as a vast array of community and environmental groups and millions of ordinary Canadians, who remain bitterly and doggedly determined in their opposition to the pipeline.

They cite the risk of oil spills, whether from the pipeline or the tankers that would have to navigate the pristine waters of British Colombia, as one of their main areas of concern.

The result is that, despite the fact that the Federal government agreed to approve the pipeline yesterday, the likelihood is that it will never be built. The decision will be seen as one of huge political folly, because it could well become a bitter election issue running up to the General Election next year, as Canada’s opposition remains against the pipeline.

And true to their word, the political opposition was quick to condemn the decision. NDP Leader Tom Mulcair said it was “pure madness” to sail super tankers in the sensitive clear waters of British Columbia. He warned of civil unrest, arguing the pipeline posed a “severe threat to social order, social peace.”

Liberal Leader Justin Trudeau accused the Harper government of being a “cheerleader for this pipeline from the very beginning when Canadians needed a referee.” He too said he would reverse the decision, if elected.

First Nations remain totally opposed too. Art Sterritt, the executive director of British Columbia’s Coastal First Nations, said the First Nations were looking BC Premier Christy Clark to stop the project. Clark will now be pivotal in whether the pipeline ever gets built.

“First Nations and our allies will protect our rights and the interests of future generations. We will never allow oil tankers into our territorial waters”, he said.

He called the pipeline a “dead project” which they would “do whatever we can to make sure that it never moves forward.”

Stewart Phillip, Grand Chief of the Union of British Columbia Indian Chiefs, was deeply angered by the decision. “In spite of the fact we expected the Harper government to pander to ‘big oil’, I sit here deeply, deeply disappointed with the Harper government,” he said.

He accused the Harper government of “dismissing the rights and interests of First Nations people in the province of British Columbia, not to mention the overwhelming opposition of ordinary British Columbians.”

The First Nations said they would immediately “go to court to vigorously pursue all lawful means to stop the Enbridge project … This project, and the federal process to approve it, violated our rights and our laws. We are uniting to defend our lands and waters of our respective territories. Our rights and laws compel us to act.”

In turn Christy Clark’s government has set out five conditions that have to be passed before her government will allow the pipeline to be built across the province. So far these are a long way from being met.

B.C Environment Minister Mary Polak responded by saying that “Our position remains unchanged: it is no … So far this project has only met B.C.’s first condition, there are four other conditions that have not yet been met.”

Clark is now under intense pressure to say no to the pipeline. The Dogwood Initiative, the province’s biggest non-partisan democracy group, also called on Clark to reject the proposal and to prevent Ottawa “ramming” the pipeline down their throats.

Forest Ethics have now set up a “Stand Strong Christy ” website, arguing that “The majority of British Columbians believe the conditions can never be met when it comes”.

There is the widespread and total opposition from other environmental groups too: Tim Gray, a spokesman for Environmental Defence, said “Opposition to the project will only grow louder and stronger every day. This project will be challenged in the courts and on the ground.”

Jim Murphy, senior counsel with the National Wildlife Federation argued that “We anticipate that Northern Gateway, like Keystone XL, will never get built.”

Mike Hudema, Greenpeace Canada’s Climate and Energy campaigner agreed with Murphy:  “Given the significant hurdles this pipeline still has to overcome, the reality is it will never be built”, he said.

Things you can do. Sign the Sumofus petition to tell Enbridge to “Honour your promise to respect the rights of First Nations and affected communities – do not start construction without their approval.”