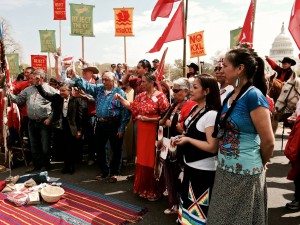 It was not a normal day in DC. But then it was Earth Day. But even for a day that celebrates our relationship with our fragile planet, this was something special. It was unique.

It started with the lighting of a fire that will burn at the center of the tipi camp erected in the middle of DC for the entire week of the “Reject and Protect” protest against the KXL pipeline.

Fresh water from the Ogallala aquifer, which the proposed pipeline route crosses, was symbolically poured into the Reflecting Pool.

Dozens of riders on horseback from the Cowboy Indian Alliance, many in traditional dress, rode down the National Mall, joined by hundreds of fellow protestors.

“We’re here to show Obama, to show Washington DC the very faces of the people that the decision of the KXL pipeline represents,” Dallas Goldtooth, one of the activists from the Alliance, told the assembled crowd on the mall. “These people represent families, they represent communities, they represent entire nations, so they’re here to bring their stories here to say no to the Keystone XL pipeline and to all pipelines.”

“We have stopped the pipeline in its tracks for the last five years,” said Jane Kleeb, from one of the organising groups, Bold Nebraska.

She added “We came to D.C. with a lot of resolve to make sure that the president sees our faces, and sees the images of cowboys and tribes working together. We think those messages from the communities that will be directly impacted will stay with the president, whether he’s making a decision today or a decision in 2015”.

Other ranchers and first nations spoke too. One Texas rancher, who came on horseback, Julia Trigg Crawford, said: “I’m here to support the neighbours to the north that don’t want the pipeline across their land”

First Nations from Canada were also there. Crystal Lameman from the Beaver Lake Cree, wanted the Obama Administration to know the tar sands industry faces fierce resistance in Canada. “We have every major oil company in the world in our traditional hunting territory,” she said, adding “We say to Obama that we have — in Canada, First Nations people have — the constitutional power to stop this pipeline.”

As the week of protests continues, the Canadian Finance Minister, Joe Oliver said Canada would keep lobbying the Obama administration to build the pipeline.

Asked if Canada should wait until a new US was in office before making a renewed lobbying push, he said: “I think it’s important for Canada to keep the issue alive.”

Don’t worry Joe, for the next few days, the issue of the KXL pipeline will be very much alive and kicking in DC. You just might not like what you see.