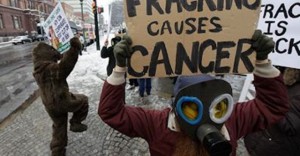 With every passing day the downside of America’s burgeoning fracking boom becomes apparent.

The industry has done much to portray fracked gas as a clean fuel. But its dirty secrets are slowly and painfully being revealed.

Yesterday came the news that scientists had discovered that emissions of the potent greenhouse gas, methane, could be up to 1,000 times higher than regulators previously thought.

We have also known for a while that the industry is producing thousands of tonnes of low-grade radioactive waste water that has to be dumped somewhere.

But now it turns out it is not just radioactive water.  Bloomberg reports that American oilfields are “spinning off thousands of tons of low-level radioactive trash as the U.S. drilling boom leads to a surge in illegal dumping and states debate how much landfills can safely take.”

And no one actually seems to know where this radioactive waste material is ending up. In North Dakota’s Bakken oilfields, “it’s a wink-and-a-nod situation,” Darrell Dorgan, a spokesman for the local Waste Coalition, tells Bloomberg. “There’s hundreds of thousands of square miles in northwestern North Dakota and a lot of it is isolated. Nobody’s looking at where all of it is going.”

Some officials who have looked are worried. Environmental Protection officials in West Virginia believe that fracking “operators were just burying them onsite, unchecked, all over the state”.

Academics who have studied the issue, believe we should all be concerned. “We have many more wells, producing at an accelerating rate and for each of them, there’s a higher volume of waste,” argues Avner Vengosh, a Duke University geochemistry professor who has examined the issue. Vengosh argues “we are actually building up a legacy of radioactivity” across the US.

And as usual the regulators are playing catch up with the industry – it has become apparent that despite the industry producing ever increasing amounts of radioactive waste, the US Environmental Protection Agency has no idea as to what a safe level of exposure is.

So it is left to local officials to pick up the mess. Back in February, North Dakota officials discovered hundreds of irradiated “oil filter socks” dumped in a disused building just south of the Canadian border. These are used to strain wastewater from the wells and become radioactive due to the water and material they are filtering.

At the time, the local mayor said the dumping was a “blatant disregard of the health and welfare of our community. It’s criminal and the people responsible should be punished very, very stringently.”

Days before more oil socks were found on flat-bed trucks nearby.

“Before the Bakken oil boom we didn’t have any of these materials being generated,” argues Radig. “So it wasn’t really an issue.”

And the problem for North Dakota is that it has no landfill facilities which can receive radioactive waste. It is hardly surprising therefore that Radig believes that “There is definitely some illegal dumping going on.”

In Pennsylvania, meanwhile, some 16,000 tons of radioactive material from fracking operations are sent to landfill a year.

As federal authorities struggle, it is left to the states to try and impose their own laws. In West Virginia, last month local politicians voted for landfills to install radiation monitors.

And now North Dakota will bring new rules from the beginning of June forcing the fracking industry to use leak-proof containers to temporarily store the oil socks at well sites.

But as ever, the regulators are just playing catch-up. “There’s such a rush to get the oil out that the rules and regulations are not keeping up with the pace of development,” argues Wayde Schafer, head of the North Dakota chapter of the Sierra Club.