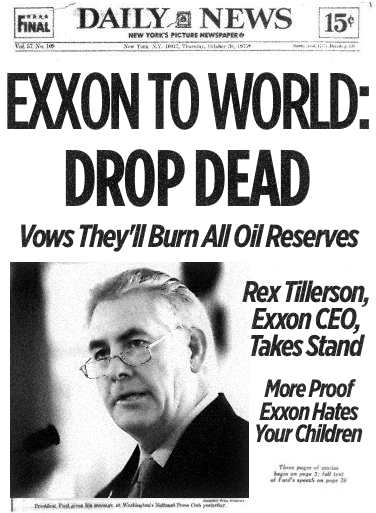 “If you haven’t yet had the pleasure of reading these reports, let me offer you a shorter version: Exxon to World: Drop Dead,” said Stephen Kretzmann, Executive Director of Oil Change International.

Exxon’s report, “Energy and Carbon – Managing the Risks” flatly states “we do not anticipate society being able to supplant traditional carbon- based forms of energy with other energy forms, such as renewables, to the extent needed to meet this carbon budget”.

“ExxonMobil is saying it doesn’t believe governments will keep their internationally agreed commitments to limit climate change to safe levels. This should not come as any surprise. Of course they don’t believe governments are going to address climate change adequately — they are in fact betting billions on the failure of climate and clean energy policy.  And they’re shoring up their bet by buying politicians and spending millions to sow doubt and promote inaction.

Still, these reports represent the beginning of the next phase of the climate fight.  Exxon is no longer ignoring or denying climate science.  Now it is denying that the American people and people around the world have the will and the power to change our futures and save our children.

They are wrong and we look forward to proving it to them.”

Together with the Other 98% and Environmental Action, Oil Change International runs the “Exxon Hates Your Children” campaign, targeting the billions in government subsidies Exxon and other fossil fuel companies receive each year. More can be found at http://exxonhatesyourchildren.com