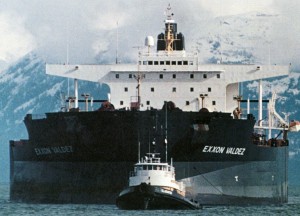 Today is the 25th Anniversary of the Exxon Valdez disaster and although a quarter of a century has passed since the disaster, its effects are still being felt today.

It was on the 24 March 1989, that the Exxon Valdez ploughed into rocks in Prince William Sound in Alaska spilling million gallons of oil into the pristine, cold waters.

The official estimate was some eleven millions gallons of oil spilt, but unofficially many more millions of gallons of oil are believed to have poured out of the tanker’s ripped hull.

Due to its landmark status, today’s 25th Anniversary has made some headlines, but slowly but surely the oil spill is seen as yesterday’s news.

But the events of that fateful night and the dreadful days and years that followed still haunt this beautiful coastline and its resilient people. And there are crucial lessons from the disaster which are being ignored as the oil industry pushes to open up the Arctic to oil drilling.

“There is a lot of bitterness still to this day,” argues Steve Rothchild from the Prince William Sound Regional Citizens’ Advisory Council. He complains that Exxon never fulfilled its promise to “make the people whole,” after the disaster.

The tragic sense of loss at the time was conveyed by one Alaskan Native elder, who said simply:  “what we see now is death. Death, not of each other but of the source of life — the water … Never in the millennium of our tradition have we thought it possible for the water to die. But it is true.”

And Prince William Sound continues to slowly die. As Marybeth Holleman, the author of “The Heart of the Sound,” argues: “The sound’s coastal ecosystem is permanently damaged. Thousands of gallons of Exxon Valdez oil still pollute the beaches; this oil is still toxic and still hurting the ecosystem near the shore.”

Even now you can still find oil buried in the shores and on the islands of Prince William Sound.

One local fisherman, Dave Janka, who collected an oil sample from one of the islands in the Sound last month is outraged at the lack of action. “Looks like oil, smells like oil. It’s oil,” Janka says. “If you or I, in our backyard or at our mom and pop gas station, had a fuel tank leak, we would be held to the point of bankruptcy to clean that up.”

Many species affected by the oil spill, such as orcas, and Pacific Herring are “not recovering”. The pod of orcas, who live in the area, have not produced a calf since the spill, and scientists believe they are heading for extinction. “There appears to be no hope for recovery,” argues the government.

The Pacific herring industry – once a vibrant part of the local community – has never reopened after the spill.  One of those who was preparing for the spring herring season when disaster struck was Michelle Hahn O’Leary.

“It just felt like I’d been kicked in the stomach,” says O’Leary now. “This was one of those turning points in life, where you measure things before and after.”

She has not fished since.

Another ex-commercial fisherman, native Alaskan Tom Andersen, can no longer make a living from the sea either. “You can’t fix it. Once you break that egg, sometimes that’s it,” he says. He did though work on the clean up. “You could smell [the oil] before you ever saw it,” he recalls.

After the oil spill, Prince William Sound was eerily silent, he recalls. “There was no fish, no birds chasing fish. You could sit there and it’d just be dead quiet. So everybody called it the dead zone.”

On this Anniversary surely it is time to reappraise the risks of allowing oil drilling in the Arctic. The “dead zone” lingers as the oil continues to poison the local environment. Oil continues to bioaccumulate  up the food chain.

In the intervening years, there has also been a realisation that crude oil is highly toxic, and that you can never adequately clean up an Arctic oil spill.

There is also a huge amount of evidence that dispersants caused more harm than good both with the Exxon Valdez and with the Deepwater Horizon.

And for those who believe that BP’s spill in the Gulf of Mexico is no longer polluting the environment, with near perfect timing as many as 300 pounds of tar balls were discovered on the Mississippi Barrier Islands on Friday.

Scientists believe that they are from the Deepwater Horizon.  BP’s lethal legacy continues too.