The State Department’s Final Supplementary Environmental Impact Statement (FSEIS) for the Keystone XL pipeline has generated various criticisms.  Despite those criticisms, a reading of the report shows that the pipeline will increase greenhouse gas emissions enough to satisfy the climate test President Obama set for rejection. But the State Department’s topline message to the media when the report was released was essentially that the pipeline was no big deal for the climate.

However, an in-depth analysis released earlier this week by the Carbon Tracker Initiative suggests that the authors of the State Department report even more severely underestimate the impact of the pipeline than initial criticisms suggest.

Carbon Tracker finds that building the pipeline would enable additional tar sands production equivalent to building 46 new coal plants.  This is obviously a significant impact, and it represents a significant difference from the State Department report that holds that the pipeline is essentially irrelevant for additional tar sands production, because the oil would come out regardless.

Why the difference?  What’s going on here?   An examination of the details raises the question of whether State’s analysis sought to verify a predetermined conclusion.

The new Carbon Tracker report is of particular interest because the State Department actually cited the UK based NGO’s earlier assessment (pdf) of Keystone XL, which predicted a significant climate impact from building the pipeline.  Footnote 154 of the FSEIS reads:

The methodology used to draw conclusions about production implications is similar to the one employed in a recent report published by Carbon Tracker Initiative (2013). However, that report’s conclusions were different due to various analytical issues.

Carbon Tracker dug in to what those “analytical issues” are, and they discovered what appear to be some key technical flaws in the State Department report. In particular, the section of the Market Analysis that was supposed to compare the pipeline to other transport costs (e.g. rail) and assess whether the pipeline would trigger additional tar sands production – and therefore additional emissions – was based on a single production cost value.  This number appears to be both low and significantly out of step with mainstream financial projections.

Carbon Tracker zeroes in on Section 1.4.5.3 of the FSEIS, which “briefly examines the transportation costs and breakeven impacts of different options for connecting oil sands producers in western Canada with refiners on the Gulf Coast.”

The FEIS recreates a table in that section (Table 1.4-27) that details the cost of transporting tar sands bitumen to the U.S. Gulf Coast, for both pipelines and rail. The State Department conclusion is that although rail costs are up to $11 per barrel higher than the lowest pipeline cost, it remains profitable at expected oil prices.

However, the entire State Department analysis rests on a single figure for tar sands production costs, which it describes as a, “(h)ypothetical supply cost of a barrel of bitumen at the producing facility.” The figure that State chose as its “hypothetical” is $45 per barrel.

What that choice does to State’s analysis is interesting:

Tar sands production is widely recognized to be among the most expensive sources of oil production in the world due to the intensive processes required to extract it, as well as its high labor and equipment costs and remote location.  The easiest and cheapest deposits of this dirty oil have already been mined, and the industry is now looking at having to spend more to produce the same amount of tar sands crude.  This is not at all controversial – mainstream financial analysts at places like Goldman Sachs and Citi recognize this and routinely forecast this “plant gate” cost at a price greater than $45 per barrel of bitumen – up to $60 or beyond over time.

The State Department report even cites Goldman cost curves in other places.  But for this particular number, they chose to use a “hypothetical.”

The Carbon Tracker analysts used data from a Rystad Energy database, which tracks the costs of thousands of oil and gas projects around the world, to discover what the real (rather than the hypothetical) costs of tar sands projects are both today and in the future. Given that the pipeline would operate for several decades, its ability to deliver tar sands production relatively cheaply to the Gulf Coast is crucial to the cost structure of future tar sands projects.

The Rystad database shows that the vast majority of future tar sands production would cost more than $45 per barrel, in many cases a lot more (see Figure 1). 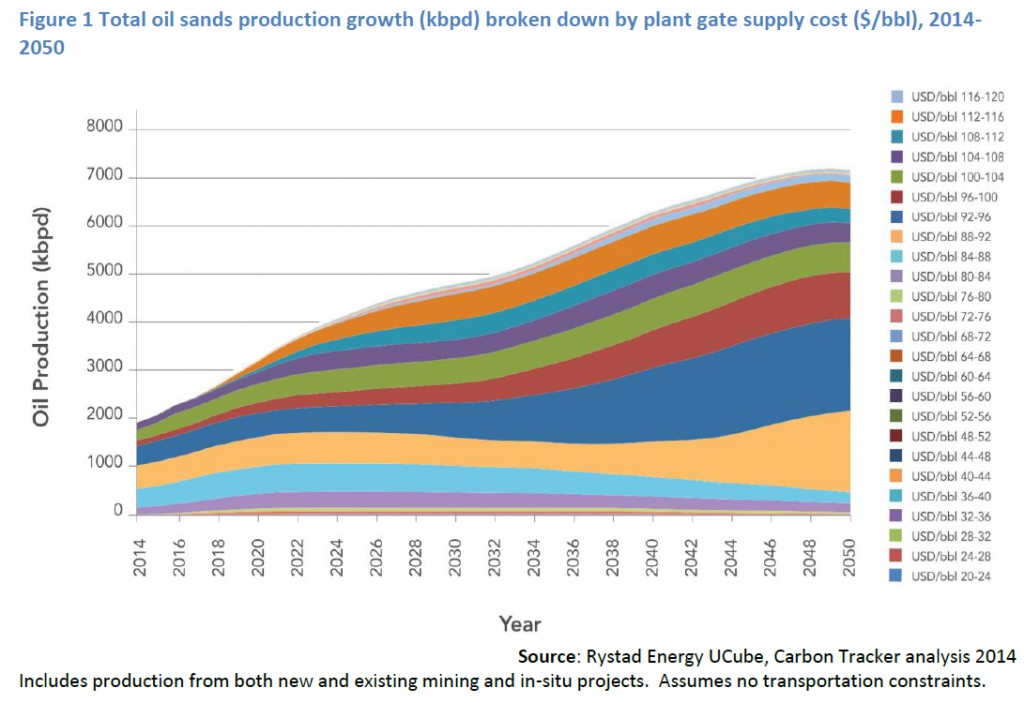 Carbon Tracker used this data to recreate the table in the State Department report using tar sands production costs from $45 to $60 per barrel (see Figure 2). The new table clearly shows that the additional cost of rail would challenge projects with costs over $55 per barrel. Given that much of future tar sands production requires at least that price or higher, the conclusion is that building Keystone XL lowers the cost of transporting tar sands to market and enables billions of barrels of production that otherwise would not be produced. 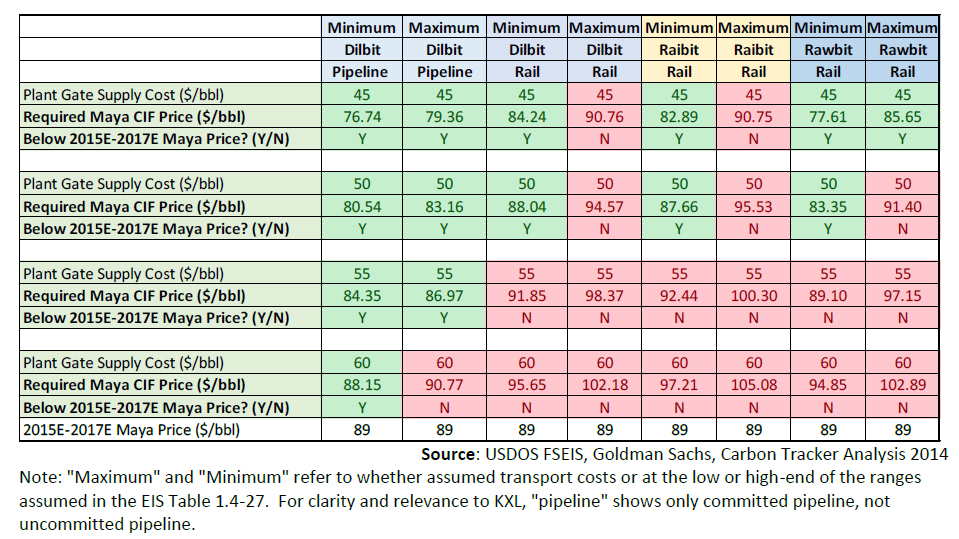 The implications of this are disturbing. The production price point at which rail transportation becomes uneconomic is $53 per barrel according to the text of the Carbon Tracker report; a mere $8 above the State Department’s “hypothetical” figure. How did State Department come to this figure and why did the authors choose not to look at the real range of production costs for future tar sands projects?

Could it be that looking at the real production costs did not suit the conclusion that the State Department has been pushing ever since its first analysis of the project in 2011? Is it possible that rather than examining the full range of available data to test a hypothesis, the State Department instead chose data that suited a predetermined conclusion?

All along this process, the State Department has appeared at odds with the opinions of many on both sides of the Keystone XL debate on the issue of whether the proposed pipeline is fundamental to the growth of the tar sands industry. The analysis in the Carbon Tracker report makes the pipeline’s importance to the industry very clear.

However, it is far from clear what has motivated the U.S. State Department to choose the analytical method that they did. Who, how, and why that “hypothetical” figure was chosen are questions that still need to be answered.