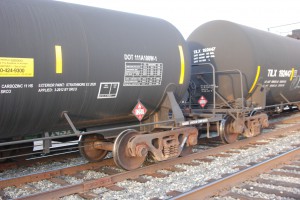 US regulators reacted to the string of recent crude by rail accidents yesterday by ordering that companies shipping crude out of North Dakota’s Bakken fracking fields must undertake extensive testing for signs of dangerous volatility.

In an Emergency Order, the US Department of Transportation (DOT) concluded the system had become “an imminent hazard to public health and safety and the environment.”

The DOT is now requiring all shippers of crude to test their products, although the order is specifically aimed at Bakken crude.

As there have been a growing number of accidents across the North American rail network, (see previous blogs here, here, here, and here) there has been increasing evidence that Bakken crude is more flammable that other crudes.

Last month, the Pipeline and Hazardous Materials Safety Administration (PHMSA) advised that recent explosions “indicate that the type of crude oil being transported from the Bakken region may be more flammable than traditional heavy crude oil.”

Earlier this week, the Wall Street Journal weighed into the debate, arguing that “Crude oil from North Dakota’s Bakken Shale formation contains several times the combustible gases as oil from elsewhere …raising new questions about the safety of shipping such crude by rail across the U.S”.

Eventually the regulator had to act. “Today we are raising the bar for shipping crude oil on behalf of the families and communities along rail lines nationwide —if you intend to move crude oil by rail, then you must test and classify the material appropriately,” said DOT Secretary Anthony Foxx yesterday.

There may be further stricter regulations to follow too. Later today, officials from the Department for Transport will join oil and rail executives at a Congressional hearing to discuss the recent spate of accidents.

A subcommittee of the House of Representatives’ Transportation Committee will question the officials. “We need to understand what government agencies and transportation stakeholders are doing to ensure safety on the system,” Rep. Jeff Denham, a California Republican who will convene the panel, told Reuters.

Among those who are due to speak is our old friend Jack Gerard, president of the American Petroleum Institute (API). The press is reporting that the API, which is normally so vocal in the public arena, “hadn’t yet provided data that the DOT had requested in order to reach a voluntary agreement.”