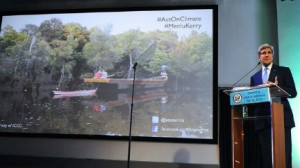 For once the words of a politician were extremely bold and clear. The warning was brutally stark. In a keynote speech on climate change in Indonesia, Secretary of State, John Kerry, likened global warming to a weapon of  mass destruction and dismissed climate sceptics as members of the “Flat Earth Society”.

“The science of climate change is leaping out at us like a scene from a 3D movie – warning us – compelling us to act”, he told the assembled guests, before going on to argue that “climate change can now be considered the world’s largest weapon of mass destruction.”

Telling the Indonesians that their very future was at stake, he then warned of the consequences of our changing climate. “All 10 of the hottest years on record have actually happened since Google went online in 1998,” he said leading the Arctic to melt into the sea faster than we ever anticipated.

“And the sea is rising to dangerous levels,” he warned. The clear threat to Jakarta was clear, he said. A one metre sea level rise is enough to put half of country’s capital under water.  Climate change also means the end of entire species and also ocean acidification, with fisheries in Indonesia “among the hardest hit”, he cautioned also saying it would lead to greater water shortages.

And he also had a blunt message for the sceptics, arguing that “we should not allow a tiny minority of shoddy scientists and extreme idealogues to compete with scientific fact”.

He likened the certainty and conclusiveness of climate change to simple scientific facts we take for granted, such as knowing that an apple would fall downwards from a tree or “that when water hits a low enough temperature, it will turn into ice, and when it reaches a high enough temperature, it will boil.  “No one disputes that”, he told the audience. Nor would they dispute the fact that when you touch a hot stove you would burn your hand.

He then added that “when thousands of the world’s leading scientists and five reports from the UN tell us – over and over again – that our climate is changing, that it is happening faster than ever in recorded history, and that we humans are the significant cause, we need to listen.

When 97 percent of scientists agree on anything, we need to listen and we need to respond.”

Continuing down the same path – one of fossil fuel dependence – will lead to the world as we know changing, he told the audience, “and it will change dramatically for the worse.”

So we know this is happening, he told the audience, “and we know it with virtually the same certainty that we understand not to touch a hot stove.”

The science is unequivocal, and “those who refuse to believe it are simply burying their heads in the sand” he contended, adding that “President Obama and I both believe that we don’t have time for a meeting of the Flat Earth Society.”

He cautioned that the window of time open for us to address climate change was closing, but we need to act now. “We simply don’t have time to let a few loud interest groups hijack the climate conversation anymore,” he said.

One climate conversation that is very much alive and kicking in the US is the debate over the Keystone XL pipeline.  After such a powerful speech calling for concerted and bold action on climate it is going to be extremely hard for Kerry and Obama to approve the pipeline, which would be an export route for the carbon intensive tar sands.

With tough rhetoric like this, Kerry and Obama will have to match it with bold action. So if they now approve the pipeline they will be accused of burying their hands in the sands too.