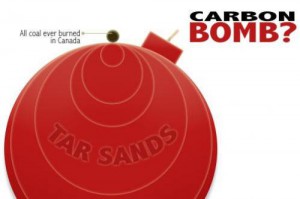 Over the last few years an increasing number of influential investors, climate scientists, analysts and activists have been arguing that we cannot afford to burn all the fossil fuel reserves due to climate change.

Adding to the debate, last November, OCI launched an interactive graphic highlighting the fact that less than a third of the remaining fossil fuel reserves can be safely burned.

And when we decide which fossil fuels should be burnt and which ones should be left in the ground, it makes sense for the most carbon intensive fossil fuels – such as the tar sands – to not be burnt.

Last December, the respected organisation Carbon Tracker, which has pioneered the concept of fossil fuel reserves being seen as “stranded assets”, argued that it would be “very risky” to invest in the tar sands today due to their climatic impact. Bloomberg even argued at the time that they would be a “shaky investment”.

Despite the fact that the climate science is telling us not to invest in the tar sands and the economists are saying that they are a risky investment, day by day the Canadian economy is becoming more and more dependent on the dirty fuel. So the opposite of what should be happening is happening. We should be disinvesting from the tar sands but Canada, seemingly blind or ignorant to the risks, is investing heavily.

A new report by the consultants IHS, in cooperation with the oil industry, argues that nearly 500,000 direct, indirect and “induced” Canadian jobs were generated by the tar sands in 2012, which is three per cent of all jobs in the country.

Whilst I have repeatedly blogged about how across the border in the US, the American Petroleum Institute repeatedly over estimates the number of jobs generated by the oil industry, we have no idea if the same is happening in Canada, as these figures have not been independently verified. What we do know is that this is a lot of jobs and over the next decade or so, the number is set to rise.

The report predicts that by 2025, nearly three quarters of a million jobs will be employed in the tar sands. This is equivalent to five per cent of total Canadian employment in 2012.

Jackie Forrest, IHS senior director, head of Oilsands Dialogue argues that the tar sands “production already represents a significant economic contribution to the Canadian economy … Those contributions, in terms of jobs, economic growth and government revenues will continue to grow along with oilsands development.”

So five per cent of Canadians could be employed in an activity – the exploitation of the tar sands – which the scientists are telling us should not be taking place. This is reckless in the extreme: both for the future of Canada’s economy and also for the global climate.

And at a time when so many people are calling for international fossil fuel disinvestment, for Canada to belligerently say it will continue exploiting the tar sands will only make the country more of an environmental pariah than it already is.