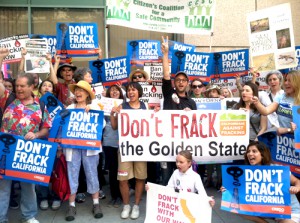 California remains gripped in a vice-like drought, with last year being the driest on record in the state.

Last month, the situation was so bad that it prompted Governor Jerry Brown to declare that the sunshine state was in a drought emergency. “We ought to be ready for a long, continued, persistent effort to restrain our water use,” Brown said.

The situation continues to get worse. Earlier this month, California’s water agency announced it may for the first time ever be unable to deliver water to local agencies, due to the drought.

The fallout from the water crisis is such that later this week President Barack Obama is scheduled to visit the state to examine the impact of the drought.

But the state’s dwindling water resources are also under threat from the thirsty fracking industry. One Californian state assemblyman Marc Levine is going to try and push through a Bill that would place a moratorium on fracking in the state.

He told Reuters that “The drought is a game changer on fracking. We have to decide what our most precious commodity is – water or oil? This is the year to make the case that it’s water.”

Last year a similar Bill failed to pass, on a vote of 37 to 24, although Levine is hoping that the drought will mean that it is successful this time.

Zack Malitz of the San Francisco-based group Credo, backs Levine’s bill. “If Governor Brown wants to be a climate leader, he is going to have to walk the walk and stop fracking in California, which would dramatically increase carbon pollution and lead to more severe droughts.”

Levine’s case is also bolstered by a recent research by the ethical investment organisation, CERES, which found that over half the US wells fracked since 2011 have been in drought-stricken areas.

In California, 96 per cent of the wells were in areas of high water stress.

The polluting technology is so water-guzzling it has soaked up almost 100 billion gallons of water. Fracking is “exacerbating already existing water problems,” argues Monika Freyman, the author of the Ceres study.

Mindy Lubber, the president of Ceres also contends that without tough new regulations, the fracking industry will be on a “collision course” with other users.