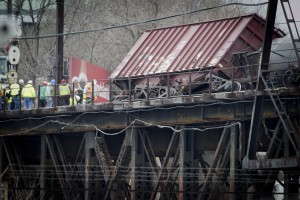 And on it goes. One accident after another.  But this time a major disaster was averted by a whisker.

On Monday a freight train, which was carrying fracked and highly flammable shale oil from North Dakota, derailed on a bridge over the Schuylkill river in South Philadelphia.

Although no oil was spilled and no one was hurt in the accident, observers said it was close to a major disaster.  Seven of the 100 or so cars of the train derailed as the train travelled from Chicago to Philadelphia.

Six of these were carrying flammable shale oil, which has exploded in other recent disasters concerning oil by rail trains. Two cars were left dangling on the bridge.

John Hanger, the local Democratic candidate for governor, who is a former state environment secretary, said “We came within a hair’s breadth of a calamity in Philadelphia”.

“I’m greatly concerned about the public safety of Pennsylvanians,” Hanger added: “It’s beyond doubt that the regulation of trains in Pennsylvania is too lax.”

He called on the local Governor to hold an emergency meeting on oil by rail safety and to impose lower speed limits on the trains.

Others too expressed their alarm. “These ‘oil bomb’ trains are putting lives at risk in urban and rural areas alike,” Iris Marie Bloom, director of the nonprofit Protecting Our Waters told the local press.

“This could have been catastrophic,” added Wes Gillingham, program director for another local environmental group, the Catskill Mountainkeeper. “The train could have exploded onto a busy highway, spewing the toxic contents directly into the Schuylkill River which flows into the Delaware River.”

The accident is the latest in what are becoming near monthly oil by rail accidents occurring across North America:

For more see my blogs here and here.

And more accidents are causing more pollution. According to data from the Pipeline and Hazardous Materials Safety Administration more crude oil was spilled in US oil by rail incidents last year than in the nearly 40 years that preceded it.

Moreover this does not include the data from the Lac-Mégantic, Quebec spill where over 1.5 million gallons of crude oil was spilt.

Meanwhile Iris Marie Bloom remains concerned. She lives so close to the railway she can hear the trains whistle at night.

“The fact that this (latest) derailment happened right over the Schuylkill, right over the expressway, it’s pure luck that there wasn’t a fireball,” as well as people killed, she argues. “We can’t count on that kind of luck in the future.”